The ASX 200 fell alongside the Hang Seng Index as a record breaking 484 cases of Covid-19 were recorded over the last 24 hours in Victoria, Australia’s second most populous state.

S&P 500 futures hovered relatively unchanged as investors look to the US Congress and the potential for a further $1 trillion in fiscal support.

Silver surged to 7-year highs as the haven-associated US Dollar sank to its lowest levels since early January. Yields on US 10-year Treasury notes hovered at 0.605% whilst gold surged above $1,850 to fresh yearly highs.

Looking ahead, 2nd quarter corporate earnings from Microsoft and Tesla will be intently scrutinized by investors whilst US existing home sales for the month of June and Canadian inflation data may prove market-moving. 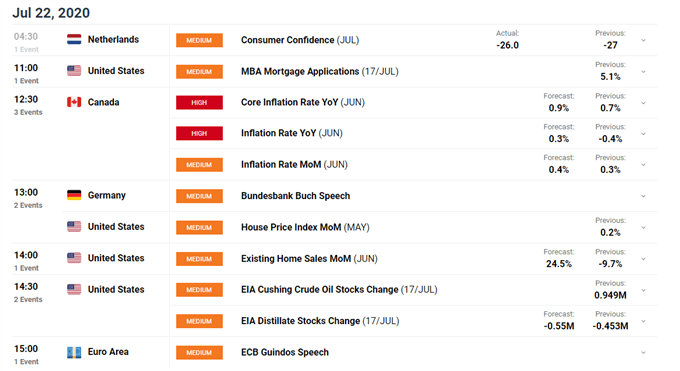 New Stimulus Package Weighing on the US Dollar

The progress made on a proposed $1 trillion in additional fiscal stimulus may dictate the outlook for the haven-associated US Dollar as Senate Majority Leader Mitch McConnell attempts to build “on what worked in the CARES Act”.

However, with more than 25 million Americans expected to stop receiving pandemic unemployment payments at the end of the month, continuing jobless claims remaining stubbornly elevated and President Donald Trump stating “it will probably, unfortunately get worse before it gets better” there is growing concerns that $1 trillion just won’t cut it.

Former Federal Reserve Chair Janet Yellen doesn’t “believe that concerns about the deficit and debt should prevent Congress from responding robustly to this emergency” and although unsure “what the right number is” she stressed that “federal support should be substantial”. 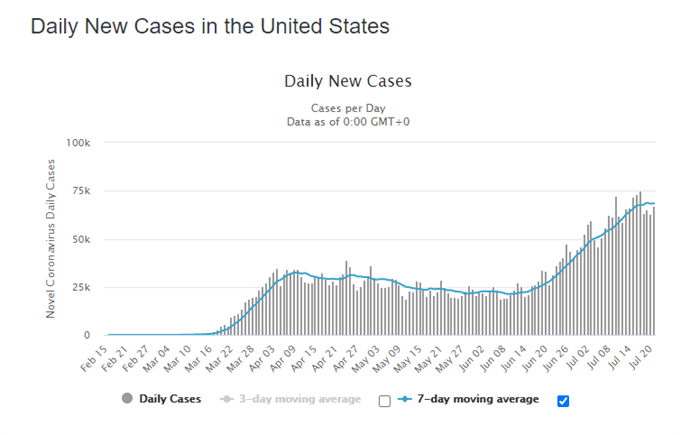 Considering the CARES Act introduced in March injected a staggering $2.2 trillion when the 7-day moving average of daily new Covid-19 cases peaked at 32,464, it stands to reason that with the daily cases doubling at present – 68,820 on average in July – a package of roughly the same amount is needed to successfully support the local economy.

That seems to be the argument from House Speak Nancy Pelosi, who’s proposed a $3 trillion ‘Heroes Act’ rescue package passed through the House nine weeks ago and which she says “addresses both the health and economic crises” facing the United States.

Although this generous proposal was dismissed by McConnell as nothing more than an “ideological wish list” the inclusion of “another round of direct payments to help American families keep driving our national comeback” highlights the willingness of Senate Republicans to compromise with their Democratic counter-parts.

That being said, it remains to be seen if US policymakers can get a deal across the line before the end of the month, with August 7 proving to be a pivotal deadline as the Senate breaks for summer recess.

Inability to deliver may prove economically devastating and potentially fuel a period of sustained risk aversion, resulting in a marked appreciation of the haven-associated US Dollar and a discounting of risk-sensitive assets.

Conversely, the successful provision of further fiscal stimulus may stoke further selling of the Greenback and continue to underpin US benchmark indices.

US Dollar Index** - Push to Yearly Low in the Offing 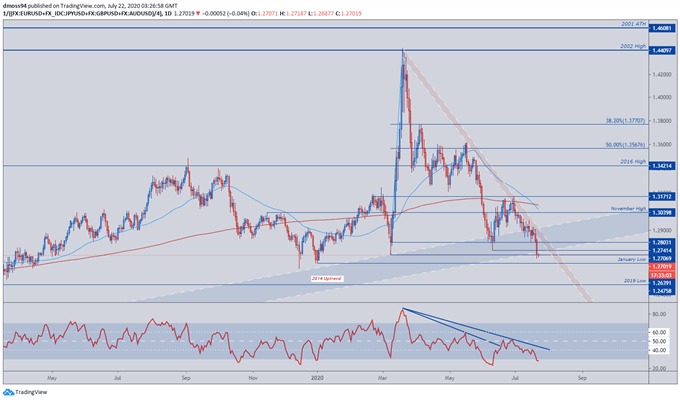 From a technical perspective, the US Dollar seems poised to continue its underperformance against its major counterparts, as price slides towards the January low (1.2639) and the RSI dives into oversold territory.

The reaction of price at the January low (1.2639) could prove to be pivotal, with the potential for a key reversal should buyers successfully defend support.

Moreover, divergence between the RSI and recent bearish price action suggests the push to fresh monthly lows may be running out of steam.

To that end, inability to clear support at the yearly low (1.2639) could signal a short-term rebound towards the 2014 uptrend.

However, a daily close back above the March 10 open (1.2803) and 4-month downtrend is needed to validate bullish potential. 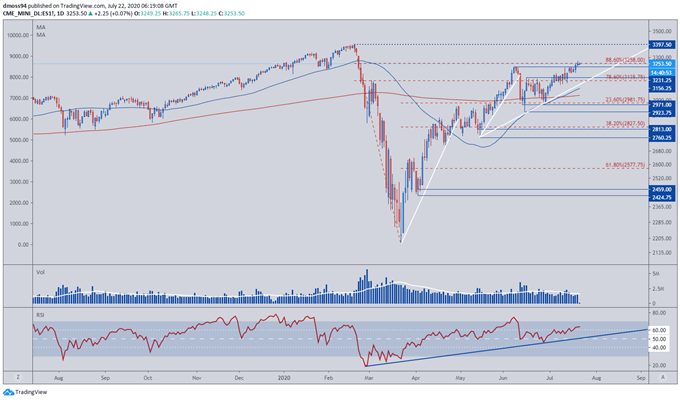 The S&P 500 stock market index continues to struggle at 88.6% Fibonacci resistance (33,258) and looks at risk of a short-term correction as the RSI fails to follow price to higher highs.

Although price broke to fresh crisis highs, fading volume and momentum suggest that a break above the psychologically pivotal 3,300 level may be a step too far.

To that end, a pull-back to the 3,150 level seems likely in the coming days should price fail to close above the 88.6% Fibonacci (3,136), with a break of trend support extending from the May low (2,760) potentially triggering a sustained decline back to the sentiment-defining 200-day moving average (3,034)