A relatively mixed day of trade during the Asia-Pacific session saw the ASX 200 follow S&P 500 futures lower as Covid-19 cases continue to climb in both nations.

The Euro broke to fresh monthly highs against its US Dollar counterpart amid EU ‘recovery fund’ progress.

Looking ahead, the European Union’s ‘special summit’ in Brussels will be keenly watched by market participants with a successful outcome potentially fueling regional risk assets.

The United Kingdom’s straining relationship with China may be a driving factor behind the recent underperformance of the GBP/USD exchange rate as it notably lags the recovery seen in its major counterparts – mainly the EUR/USD and AUD/USD exchange rates.

The ongoing spat with China is certainly not calming the nerves of regional market participants and looks set to escalate after British Foreign Secretary Dominic Raab called “out the government of China for its human rights abuses of the Uighurs, also of Hong Kong”.

Chinese retaliation is almost a certainty as China’s ambassador to the United Kingdom Liu Xiaoming warns “if the UK goes that far to impose sanctions on any individuals in China, China will certainly make a resolute response to it”.

The ambassador went on to suggest “the UK should have its own independent foreign policy rather than dance to the tune of the Americans like what happened to Huawei”, hinting at Beijing’s displeasure with the UK’s decision to implement “in law an irreversible path for the complete removal of Huawei equipment from our 5G networks”. 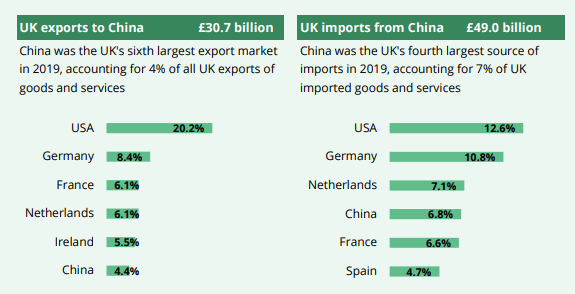 With Raab expected to suspend the UK’s extradition treaty with Hong Kong when he addresses parliament on Monday, there is scope for further deterioration of this vital trading relationship as Britain attempts to fall in line with the tone set by the US and its fellow members of the “Five Eyes” alliance – Australia, Canada, New Zealand and the United States.

Although Xiaoming does “not want to see this tit-for-tat between China-U.S happen in China-UK relations”, this outcome is becoming more and more likely with Britain caught between a rock and a hard place.

Considering the ongoing post-Brexit trade negotiations with the US – the UK’s largest trading partner – it is understandable that the British government wants to ensure it aligns its agenda with their Trans-Atlantic counterpart.

However, this may come at a cost in the lead up to the US election with rhetoric between the US and China expected to escalate, potentially dragging the United Kingdom further into Beijing’s crosshairs should they continue to support their ally’s approach to Chinese “internal affairs”.

To that end, the British Pound could likely struggle in the coming months should vitriolic rhetoric escalate into the imposition of economically devastating tariffs and sanctions.

The European Union’s proposed €750 billion coronavirus recovery fund may fuel the Euro against the British Pound as reports suggest the “Frugal Four” nations are willing to accept a composition of €390 billion in grants and €310 billion in loans.

A considerably different makeup to the original plan - €500 billion in grants, €250 in loans - highlights the concessions made to entice the wealthier northern nations to ink a deal.

However, it is yet to be seen if other members will agree with the “Frugals” - Netherlands, Austria, Denmark and Sweden - as they push for the imposition of economic reform requirements and attaching rule of law conditions to the provision of funds.

Nevertheless, “there has been movement in the right direction” according to Austrian Chancellor Sebastian Kurz, reinforcing French President Emmanuel Macron’s comments that France and Germany are “ready to compromise without giving up on ambition”.

That being said, all 27 member states understand the importance of providing further fiscal support, with EU Budget Commissioner Johannes Hahn stressing its “high time to reach an agreement which allows us to provide the urgently needed support for our citizens and economies”.

To that end, the announcement of an agreement would be monumental for the trading bloc, potentially fueling the Euro against its major counterparts and symbolising an elevated level of cohesion in the European experiment.

GBP/USD Daily Chart – Test of Monthly Range on the Cards 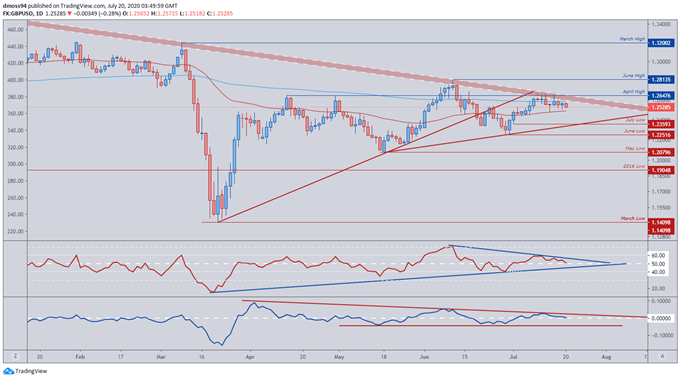 As noted in previous reports, the 200-day moving average has continued to stifle GBP buyers as a temporary rally above the sentiment-defining indicator generated a period of indecisive consolidation, highlighted by the proliferation of Doji and Inverted Hammer candles.

The outlook for GBP/USD remains skewed to the downside as the RSI and Momentum indicators respect their downtrends and begin to slide below their neutral midpoints into bearish territory.

That in mind, the July low may prove pivotal as it converges with the 8-week uptrend extending from the May low (1.2080), with a daily close below potentially generating a sustained decline to retest the record low set in March (1.1410). 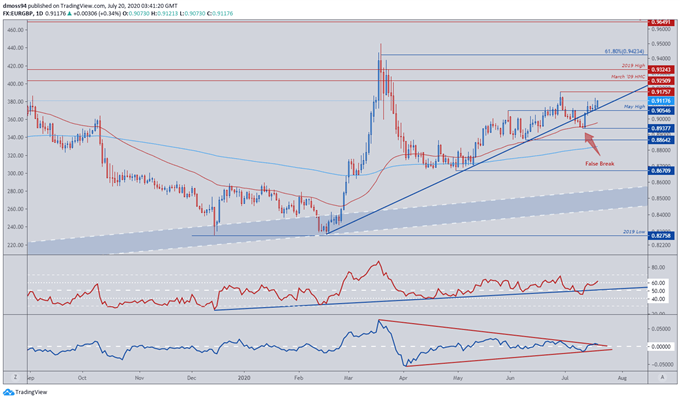 The EUR/GBP exchange rate is eyeing a push above resistance at the June high (0.9176) as the RSI surges into bullish territory and the 50-day moving average notably steepens, suggesting intensifying buying pressure.

A run to test the yearly high (0.9500) looks in the offing after a break of trend support was met with a barrage of buyers at the 50-DMA, resulting in a Bullish Engulfing candle pushing price back above resistance at the May high (0.9055).

A daily close above the psychologically pivotal 0.92 level may validate bullish potential, with key hurdles at the 2019 high (0.9251) and 61.8% Fibonacci extension (0.9423) standing in the way of EUR/GBP rates climbing to fresh yearly highs.

However, attention should be paid to the Momentum indicator as it notably diverges with price, hinting at a degree of underlying weakness in the recent rally.

A break of trend support could lead to a short term-correction back to sentiment-defining May high support (0.9055). A close below potentially fueling a sustained decline back to the 200-day moving average (0.8819).