The end of the Asia-Pacific trading week brought about a rather timid day of trade with most regional equity markets nudging higher.

The trade-sensitive Australian Dollar held its ground despite the nation recording a record daily increase in Covid-19 cases.

Gold nudged higher after falling back below $1,800 whilst crude oil remained relatively unchanged as investors weighed falling US stockpiles against weakening global demand.

Looking ahead, speeches from the European Central Bank’s Isabel Schnabel and Luis de Guindos headline a rather light economic docket alongside housing data out of the United States as investors turn their focus to the European Union’s special summit in Brussels over the weekend.

The haven-associated US Dollar has notably declined in recent days despite Covid-19 cases continuing to surge in several US states.

This seems somewhat counterintuitive when considering the binary theme seen in financial markets over the last 12-18 months, with souring market sentiment usually fueling haven in-flows and strengthening the US Dollar.

However, this hasn’t been the case in recent weeks as the Greenback continues to fall against its major counterparts, seemingly undeterred by case numbers in the US surging by 71,000 on July 17 – the highest recorded jump since the beginning of the pandemic – and the number of deaths exceeding 138,000.

Could the lack of response in the world’s most liquid currency be due to the market’s assumption that deteriorating fundamentals equal further fiscal and monetary stimulus?

Given the unprecedented response from policy makers, this assumption is hardly unfounded, as the swift introduction of over $5 trillion in emergency stimulus programs has successfully underpinned the recovery in regional risk assets and helped to minimise the economic shock caused by Covid-19 restrictions.

The flow of stimulus looks set to continue with Federal Reserve Governor Lael Brainard flagging that the “next phase of monetary policy will be guided not only by the exigencies of the COVID crisis but also by our evolving understanding of the key longer-run features of the economy, so as to avoid the premature withdrawal of necessary support”.

With that in mind, worsening health outcomes could likely force the central bank to come to the US economy’s rescue as it remains “actively committed [to] providing a backstop if downside risks materialize”

In fact, a glance at the Federal Reserve’s balance sheet suggests that policymakers may have already begun to introduce further support, as it expanded for the first time in 4 weeks after falling to the lowest levels since mid-May.

What’s more, the $37.9 billion increase in the central bank’s assets coincided with the recent weakness seen in the US Dollar and the S&P 500’s push to re-test the post-crisis high.

A continuation of this trend looks likely, as the reimposition of Covid-19 restrictions in California, Texas and Arizona jeopardizes the United States’ fragile recovery.

To that end, the US Dollar may continue to lose ground against its risk-associated counterparts, as policymakers stand committed to using their “full range of tools to support the US economy”. 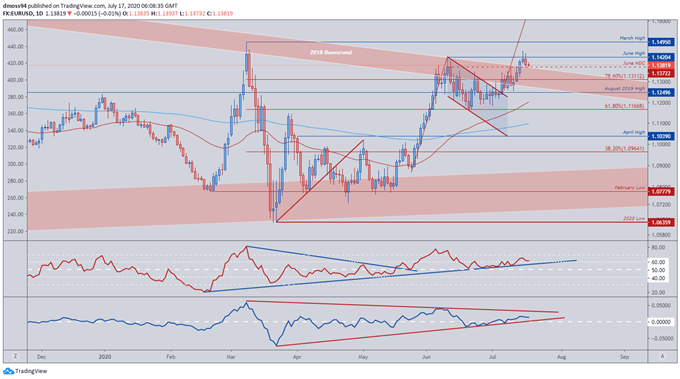 From a technical perspective, the outlook for the EUR/USD exchange rate continues to look positive as price successfully breached the 2018 downtrend, closing convincingly above the Bull Flag validation level at the June high daily close (1.1311).

A push to fresh yearly highs looks to be in the offing as the RSI climbs into bullish territory above 60, flirting with a possible entry into overbought territory.

Should this occur, a break above the March high (1.1495) is possible if buyers can successfully clear resistance at the June high (1.1420).