A distinct lack of appetite for risk was seen throughout Asia-Pacific trade, with the Australian Dollar plunging after the local jobless rate jumped to the highest level since 1998.

S&P 500 futures nudged lower as the haven-associated Japanese Yen and US Dollar clawed back lost ground against their major counterparts.

ECB to Hold Fire Ahead of EU Recovery Fund Negotiations

Having just expanded its Pandemic Emergency Purchase Program (PEPP) by €600 billion in June, the European Central Bank is expected to keep its monetary policy levers steady on Thursday as focus turns to the European Union’s ‘special summit’ and deliberations regarding the implementation of a €750 billion coronavirus recovery fund.

ECB President Christine Lagarde believes the EU’s recovery fund “is a game-changer” for the Euro-zone as it “demonstrate(s) that there is a European Union, and that there is unity of purpose in order to continue to build and develop this market”.

However, Lagarde acknowledges that negotiations may “take a few days [and] a few nights” as the “Frugal Four” - Austria, Sweden, Denmark and the Netherlands - remain critical of the proposed size and composition of the long-awaited fiscal stimulus package.

German Chancellor Angela Merkel confirmed Lagarde’s musings stating that although she had agreed on the “basic structure” of the fund with French counterpart Emmanuel Macron, there was still a “long way to go” to get a deal across the line.

With that in mind, approval of the recovery fund at the initial summit on July 17, may fuel regional risk assets and the growth-sensitive Euro.

On the other hand, the need for a second summit may notably sour market sentiment, resulting in a period of risk aversion and a subsequent depreciation of the EUR/CHF exchange rate and EU Stoxx 50 index. 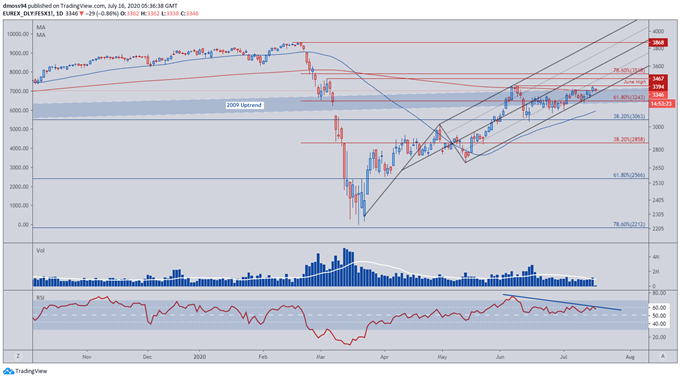 The EU Stoxx 50 successfully broke back above the 200-day moving average (3,345) yesterday, before key resistance at the post-crisis high (3,394) stifled bullish potential.

Although price continues to track within a constructive Schiff pitchfork, the RSI hints at a potential break lower as it fails to follow price to higher highs.

However, resistance-turned-support at the 200-DMA may serve as a launching pad for price as volume bursts above its 10-day

Conversely, a break below the psychologically pivotal 3,300 level may ignite selling pressure, probably resulting in a sustained decline back to the 50-day moving average (3,150) and 38.2% Fibonacci (3,063). 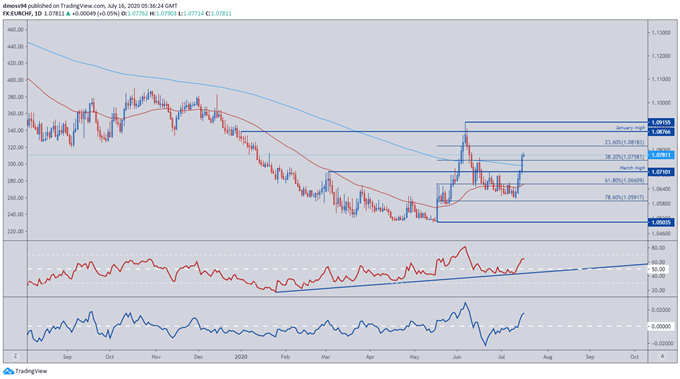 EUR/CHF continues to serve as a proxy for regional market sentiment with the recent 5-day surge, from support at the 78.6% Fibonacci (1.0592) back above the 200-day moving average (1.0740), coinciding with improving fundamentals and the potential for further stimulus measures.

With the RSI surging towards overbought territory the path of least resistance remains to the upside as the Momentum indicator climbs to the highest levels since price set the yearly high in June (1.0915).

A period of consolidation looks likely as price confronts psychological resistance at the 1.08 level, with a short-term correction back to support at the 38.2% Fibonacci (1.0758) potentially preceding a sustained push to test the yearly high (1.0915).

Development of the RSI may provide an early indication of future direction, with the oscillator breaking into overbought territory probably igniting a push above the 23.6% Fibonacci (1.0818) and potentially signalling further upside for risk-sensitive assets.