The haven-associated US Dollar and Japanese Yen retreated against their risk-sensitive counterparts whilst gold continued its climb above $1,800.

A notable surge in the Chinese Yuan perhaps stoked risk appetite, as the USD/CNH exchange rate dropped below 7.00 and into oversold territory for the first time since the agreement of a ‘phase one’ trade deal in January.

Looking ahead, US jobless claims headline the upcoming economic docket and may prove market-moving should both initial and continuing claims continue to disappoint.

US jobless claims data has been a mixed bag over recent weeks, with both continuing and initial claims consistently exceeding market forecasts.

Considering the current state of affairs, it is not irrational to expect this trend to continue as confirmed cases of the novel coronavirus surpass 3 million, forcing the imposition of lockdown measures in several US states.

This hypothesis may hold more weight as President of the Federal Reserve Bank of Atlanta, Raphael Bostic, believes “the energy in terms of reopening for businesses and for just general activity is starting to level off”.

With unemployment benefits set to run out at the end of July, Bostic has called for Congress to introduce further support to prevent the US economy hurtling off the edge of a fiscal cliff as “officials throughout the Federal Reserve system have been pretty clear that even if there is weakness, it is not always obvious that the Fed is the right body to be doing the response”.

As permanent job losses in the US surge to the highest levels since 2013, the future of millions of American employees hinge on “what the next relief package should look like”. Bostic stressed that “the longer this goes” without businesses getting relief, the more likely it becomes that many of the recent job losses to “move from the temporary column into the permanent column”.

To that end, worse-than-expected claims data may fuel a period of risk aversion as investors look to Congress for guidance when ir reconvenes on July 20. 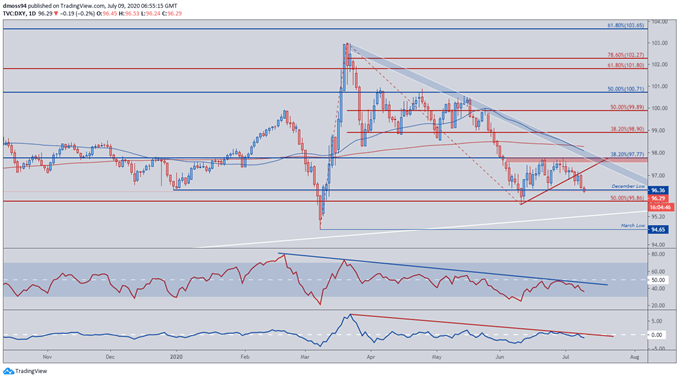 From a technical perspective, the US Dollar’s outlook remains skewed to the downside after a break of the uptrend from early June ignited selling pressure, propelling the Greenback through support at the December low (96.36).

The RSI and Momentum indicators reinforce the bearish bias reflected in price action, with both oscillators remaining capped by their respective downtrends.

A sustained decline back towards the yearly low (94.65) may be in the offing should the RSI strengthen into oversold territory.

However, pivotal support at the 50% Fibonacci (95.86) will need to be overcome to validate bearish potential. 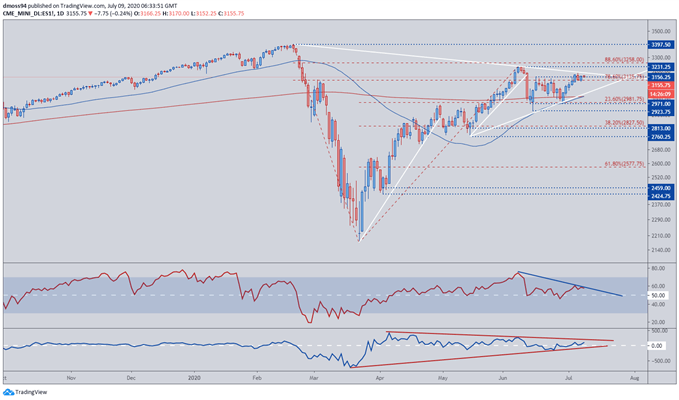 Discounting fundamental drivers, the S&P 500 continues to struggle at the psychologically imposing 3,200 level.

The benchmark US index seems poised for a decline back to the 200-day moving average (3,017) as the RSI fails to follow price to higher highs – known as bearish divergence – suggesting exhaustion in the most recent rally.

Conversely, a break above the June high (3,231) is needed to validate bulls and may potentially signal the continuation of the uptrend from the March low (2,174)