DAX 30, EUR/USD Poised to Rise with US Jobs Data in View

The US Dollar and Japanese Yen trekked lower as investors were notably buoyed by news from pharmaceutical juggernaut Pfizer, confirming one of their potential vaccines was successful in producing antibodies against the novel coronavirus.

Despite recording the largest daily increase of Covid-19 cases in California and Houston, the S&P 500 nudged back above 3,100. It was followed higher by the risk-sensitive Australian Dollar as market participants seemingly dismiss lockdown concerns in favor of relatively positive manufacturing data.

Looking ahead, US non-farm payrolls data headlines the economic docket of the last trading day for the week, as US market participants celebrate the Independence Day holiday on July 4, with financial markets closed.

A shortened trading week results in an early release of the volatility-inducing US non-farm payrolls figure, with expectations of 3 million jobs being added to the local economy in June.

Flashing back to last month’s surprising addition of 2.5 million jobs, grossly surpassing estimates of an 8 million decline, calls into question the accuracy of the forecast this time around.

Nevertheless, a better than expected print may continue to lift sentiment already bolstered by news of progress in the development of a coronavirus vaccine and building on a modest, yet positive monthly increase in private payrolls – slightly undershooting estimates of 3 million with 2.37 million employees hired in June. 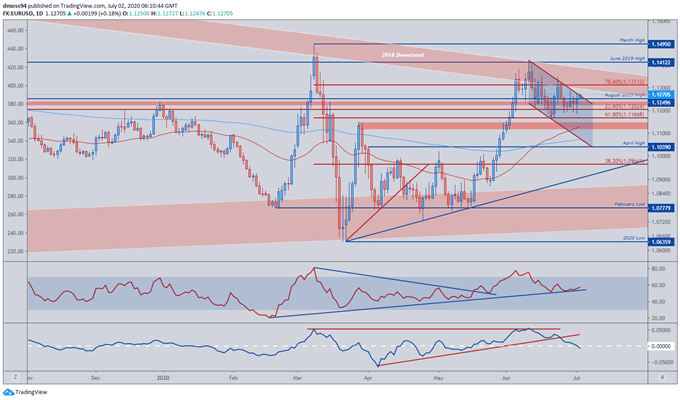 An interesting dynamic has developed over the last few days of trade as the Momentum indicator diverges with RSI and recent bullish price action.

Although EUR/USD seems to be carving out a Bull Flag formation above bearish invalidation at the 61.8% Fibonacci (1.1167) Momentum continues to fade into negative territory.

With this in mind, price action may not be as cut and dry as it seems. A daily close above resistance at the 78.6% Fibonacci (1.1312) potentially validates a break of the bullish continuation pattern, with the implied move suggesting a surge above the March high (1.1495).

However, a bearish tilt remains should the Momentum indicator fail to catch up with its technical cousin, the RSI, potentially leading the Euro to break down against its US Dollar counterpart.

The start of July signaled a pass of the baton to German Chancellor Angela Merkel as she takes over the six-month rotating presidency of the European Union.

The Chancellor faces significant short-term challenges as the EU’s ‘frugal four’ – Sweden, Denmark, the Netherlands and Austria – hold up plans for a proposed €750 billion recovery fund.

With several member nations objecting to the proposed distribution of funds, the painstaking task of getting all 27 EU states to agree and ratify terms probably won’t happen overnight.

However, the political prowess, reputation and experience of the Chancellor may accelerate the process, quenching investors' calls for further stimulus.

Development will continue to be closely watched with a successful outcome potentially placing a premium on regional risk assets. 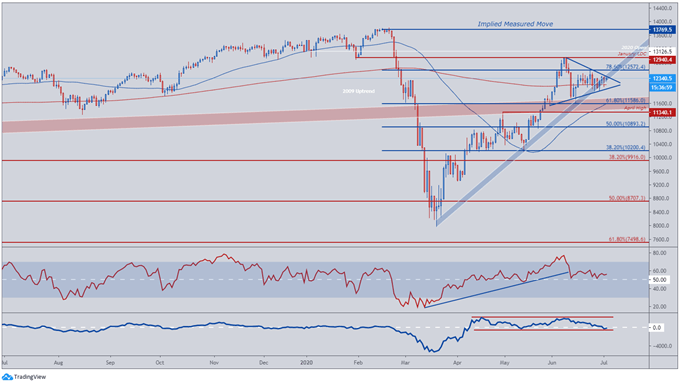 The German benchmark index has tracked in a frustratingly tight range on either side of the 200-day moving average (12,160) since mid-June, carving out a bullish Symmetrical Triangle capped by resistance at the 78.6% Fibonacci (12,572).

The outlook for the DAX seems tilted to the upside as price rests tentatively above the sentiment-defining 200-DMA.

With the RSI remaining constructively positioned above its midpoint the path of least resistance appears skewed to the upside.

A daily close above the 78.6% Fibonacci (12,572) is needed to validate a topside break of the bullish continuation pattern, with an implied move potentially seeing price scale back above the yearly open (13,126) to retest the February highs (13,770).

Development of the Momentum indicator may prove pivotal as it bounces off channel support. Reversion of the oscillator to 8-week resistance potentially bolstering bullish potential. A break of resistance likely fueling a near-term correction.