EUR/USD Falters as COVID-19 Cases Surge, US Stocks May Recover

Follow-through from last night’s Wall Street session was evident early in Asia trade, as the haven-linked US Dollar and Japanese Yen continued to surge while S&P 500 futures plunged alongside the risk-sensitive Australia Dollar.

Appetite for risk seemed to return after the first hour of trade in the Tokyo session, as risk assets began to retrace early losses. US Treasury yields moved higher followed by US stock futures as the Yen plunged after Japanese Industrial Production declined to the lowest readings since 2011.

Looking forward, UK GDP and Balance of Trade data headline the economic docket with GDP expected to shrink 10% in the three months to April.

Bloodbath on Wall Street as US COVID-19 Cases Surge

US stocks were hammered overnight as a surge of new cases in California, Texas and Florida ignite fears of a possible secondary outbreak.

The S&P500 plunged 5.9% with the Dow Jones dropping just shy of 2,000 points, as risk-appetite all but disappeared.

Not even a decline in continuing jobless claims could stop the bleeding, as the dovish economic outlook portrayed by Federal Reserve Chairman Jerome Powell seemed to suck the wind out of risk asset’s sails.

Russell 2000 small-caps took the brunt of the sell-off, plummeting 7.5% after pushing into overbought territory just two days ago.

However, the decline may not be solely based on investor sentiment as the expansion of the central bank’s balance sheet falls to the lowest levels since February.

A continuation of this trend could fuel the recent decline, as investors begin to assess the “considerable risks to economic outlook over the medium term”. 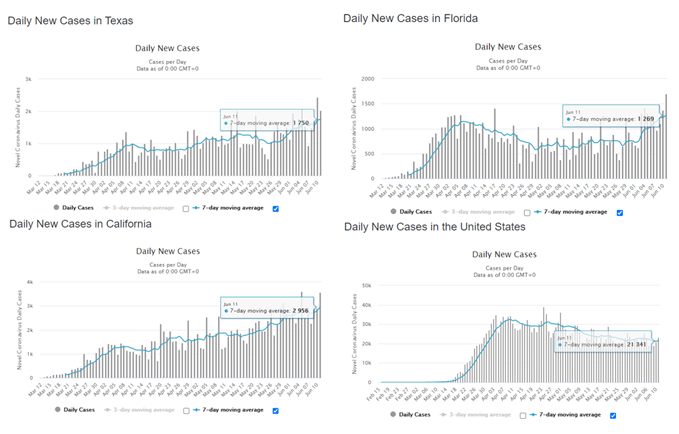 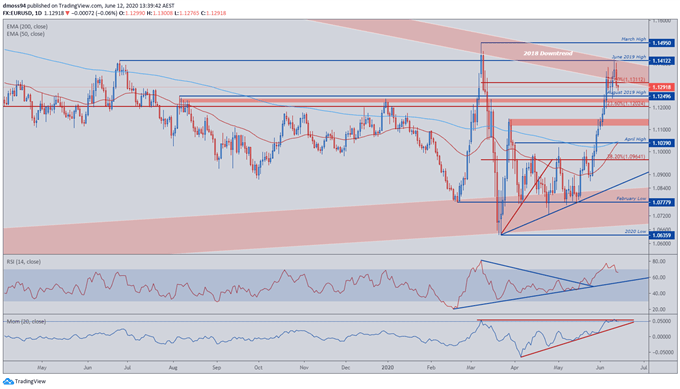 Despite soaring into overbought territory earlier in June, EUR/USD failed to penetrate formidable resistance at the convergence of the 2018 downtrend and June 2019 high (1.1412).

A bearish engulfing candle at the psychologically imposing 1.14-handle may signal a correction in the recent rally, as price closed below the 78.6% Fibonacci retracement (1.1311) of the March range.

Furthermore, the RSI diving back below 70, in combination with the momentum indicator U-turning at the March high, could initiate further downside pressure as prices decline towards support at the August 2019 high (1.1250) and 23.6% Fibonacci (1.1202).

Nevertheless, the development of the 50- and 200-day moving averages remains bullish, as a ‘golden cross’ becomes increasingly likely.

Should price remain constructive above support at the 1.12-handle, in tandem with the RSI surging back into overbought, a push to retest the monthly high (1.1423) could eventuate.