US Dollar, Yen May Rise as Markets Turn Timid After US Jobs Data

Financial markets languished in digestion mode at the start of the trading week. Futures tracking the bellwether S&P 500 stock index oscillated near Friday’s highs, where it rose in the wake of surprisingly strong US employment data. Asia-Pacific bourses performed in kind, shedding early gains to trade flat ahead of the opening bell in Europe.

The standstill suggests traders are shying away from extrapolating US labor market strength to feed the broader risk-on narrative defining financial markets since late March. That is when the Federal Reserve began unveiling a series of back-to-back stimulus programs aimed at unlocked seized-up credit markets, starting with making QE open-ended. 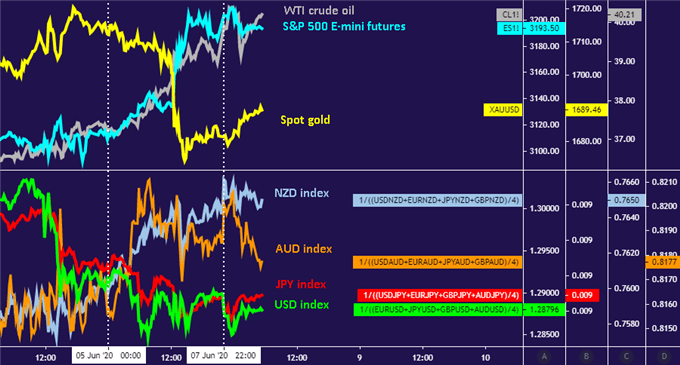 This seemingly sudden lack of enthusiasm after weeks of sometimes confounding exuberance is eye-catching. Perhaps markets have now adequately priced in the Fed’s heretofore successful firefighting efforts as well as the broadening global unwind of coronavirus lockdown measures. That may set the stage for relief triggered by these near-term wins to give way to concerns about the incoming recession’s longer-term impact.

To that end, the semi-annual outlook update from the World Bank due today may take on greater significance than usual. While the downbeat tone that will almost certainly appear should be especially surprising, it may help to crystalize the malaise ahead at a time when markets are prepared to truly hear the message. A gloomy tilt from ECB President Christine Lagarde – due at the European Parliament – may be an amplifier.

If risk appetite does unravel, the anti-risk US Dollar and Japanese Yen seem like the most likely beneficiaries in the G10 FX space. On the other side of the spectrum, the cyclical Australian, Canadian and New Zealand Dollars may bear the brunt of selling pressure. Major currencies of every stripe may likewise outperform against emerging-market counterparts as the premium on liquidity swells anew.