The recent rally in riskassets seemed to fade during Asia-Pacific trade, with investors perhaps pausing to reflect ahead of the European Central Bank interest rate decision and press conference later today. Equities stalled at monthly highs while the US Dollar held its ground against its risk-sensitive counterparts. Treasuries continued their decline as the yield on the US-10 year pushed back to 0.75.

AUD/USD slipped after Australian retail sales posted a record decline in April (-17.7%) and the US moved to bar Chinese airlines in the latest heated exchange between the world’s two largest economies. Gold stabilized at $1,700 after falling 2.5% in the last two days.

USD Looking to Bounce Back From 3-Month Lows 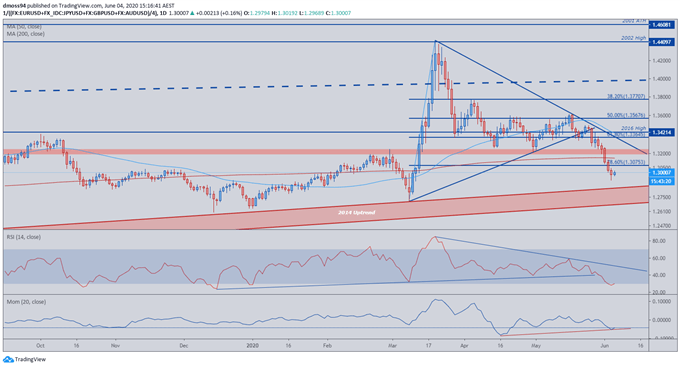 The US Dollar is attempting to ‘stop the bleeding’ as it falls to its lowest levels since early March against its major counterparts, as market participants eye the US Non-Farm Payroll (NFP) release on Friday.

The February high (1.3244) prevented the USD from collapsing throughout April and May,but the start of a new month invigorated sellers as price sliced through the 200-day moving average (1.3150) before bouncing from fresh three-month lows (1.2925) yesterday.

Although RSI registered its first oversold reading since the 1st of January, the recovery and entry back above 30 may re-energize buyers as momentum also recovers from its second most negative reading since early 2018.

The reaction of RSI may provide an early indication of future momentum, as a slide back into oversold territory could result in a continued push to freshmonthly lows.

Attention will be focused on the European Central Bank’s press conference, as the market overwhelmingly expects President Christine Lagarde to announce a €500 billion top-up to its Pandemic Emergency Purchase Programme (PEPP).

Although the ECB has yet to spend more than a third of the €750 billion stimulus program initiated in March, the depth of the economic shock experience by the Euro-zone demands an increased response, with a failure to deliver possibly reigniting credit market fears which saw the EURUSD decline 7.5% from its March high.

With a focus on telecommunications, infrastructure and electric vehicles it’s clear that the Chancellor is maintain her commitment to “spend whatever it takes” to nurse the local economy back to pre-crisis conditions. This announcement led to a monster 4% rally in the DAX, as it broke back above the March high (11,277). 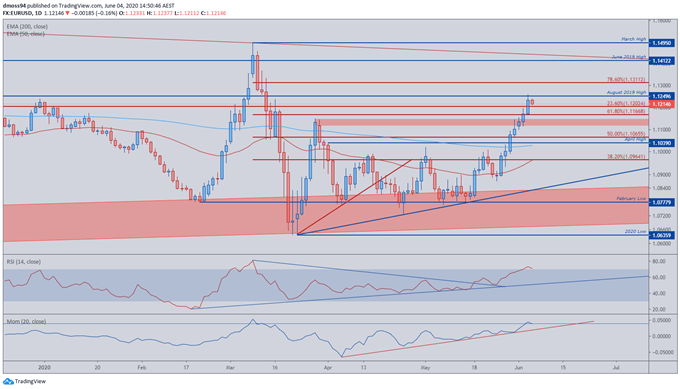 The Euro’s run of 7 consecutive days of appreciation against the US Dollar stalls at the August 2019 high (1.1250) as the Relative Strength Index (RSI) threatens to dive back below 70.

The momentum oscillator seems to support the exhaustion highlighted by RSI, U-turning after registering its second-most extreme reading since 2018.

With technical studies pre-empting a possible correction, prices may fall back to support at the 61.8% Fibonacci retracement (1.1167) of the March range with the next key region of interest at the former resistance zone provided by the March 27th high (1.1148) and March 30th open (1.1010).

Although there is potential for a short-term correction development of the 50-MA and 200-MA will remain of interest in the coming days as the possibility of a ‘golden-cross’ looks increasingly likely.