GBP/USD Faces a Familiar Foe While Merkel Pushes For Stimulus

It’s safe to say that appetite for risk was plentiful during Asia trade, with green seen across the board in global equities markets, while safe-haven currencies like the US Dollar and Japanese Yen continued to depreciate against their major counterparts.

The commodity-linked AUD/USD dipped after pushing to the highest levels since January as Australia ends historic period of economic growth, with the contraction in 1Q GDP pushing the region towards a technical recession.

Gold and US treasuries slipped as market participants dismiss a multitude of existential risks to the global economic recovery and appear to be putting their capital to work. Crude pushed to fresh three-month highs ahead of the OPEC meeting on June 9th as the update to API crude inventories showed a 0.5-million-barrel draw in the week ending May 29th. 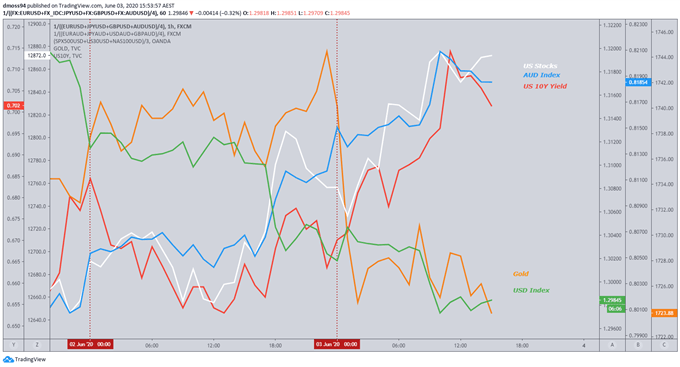 With the final Services PMI prints for Germany, France, Italy and the Eurozone on tap, investors will get the chance to assess the progress made since the record contractions seen in April.

Unemployment should also be closely monitored to gauge the rate of economic recovery and whether the gradual reopening of economies is helping to replenish the hard-hit labour market. Particular attention will fall on German data as the Euro Zone powerhouse attempts to claw its way out of a recession.

Although German Chancellor Angela Merkel failed to get the announced EUR100 billion stimulus package across the line after nine hours of deliberation, the development did little to dampen the bullish price action the Euro and the DAX.

As deliberations are set to resume today, the confirmation of the stimulus package, which includes the implementation of a municipal aid rescue fund and the allowance of investment write-offs, could fuel the appreciation in EUR/USD.

Little progress seems to have been made to secure a free trade Brexit deal as negotiators from the UK and the European Union (EU) enter their fourth round of talks this week.

The repeated butting of heads on a long list of issues has reignited concerns that a ‘No Deal’ Brexit could become a more than likely scenario. As noted earlier, the door is closing incredibly quickly on Prime Minister Boris Johnson as the deadline to extend the transition period is set for June 30th, and the progress, or lack thereof, in the next three weeks may ultimately determine the next six months of price action for the Pound Sterling. 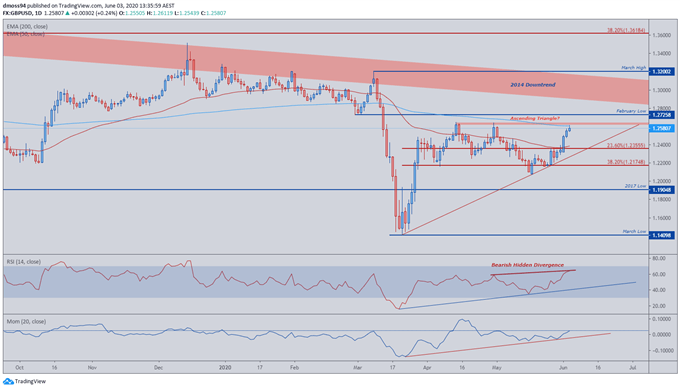 The British Pound has continued where it left off last month, climbing 4.5% against its US Dollar counterpart since the 18th of May low (1.2075). GBP/USD has now run into a familiar enemy at the April-highs (1.2610 – 1.2650), which has proved insurmountable in two previous attempts. Convergence with the 200-day moving average (MA) presents a formidable challenge to further gains as the Relative Strength Index (RSI) wanes ahead of the overbought region above 70.

Although there is a degree of bearish divergence on both oscillators, the development of price in a potential Ascending Triangle pattern suggests that an explosive breakout could be on the cards should GBP/USD overcome resistance at the April-high (1.2648).

With that being said the Pound’s recent rally seems to be running out of legs and a period of consolidation could lead to price sliding back to the 50-MA, as it scales above the psychologically imposing 1.24-handle.

The March-uptrend and 23.6% Fibonacci retracement (1.2355) from the April-high could provide a back-stop for the GBP/USD should price decline from current levels, with a collapse of price below these levels invalidating the bullish Ascending Triangle Pattern.