Undeterred by reports Chinese officials had ordered government-owned companies to suspend purchases of US agricultural products, risk assets continued their run higher in early Asia trade. The Nikkei surged back to pre-crisis levels, whilst the trade-sensitive Australian and New Zealand Dollars held firm against the US Dollar. The Reserve Bank of Australia (RBA) kept the targets for the official cash rate and three-year yields steady at 0.25% as Governor Philip Lowe, and the committee, believe the ‘depth of the economic downturn may be less than expected’.

U.S futures erased early gains after President Donald Trump addressed the nation following 7 consecutive days of riots and protesting over the death of George Floyd; threatening to invoke the Insurrection Act of 1807, which would allow deployment of the military to respond to domestic protests.

No-Deal Brexit Back on The Table

The threat of a ‘no deal’ Brexit is back as negotiations between the UK and the European Union head into their next round of talks. COVID-19 has hampered the effectiveness of these meetings, as discussion over contentious issues has been limited to virtual chats. With the 31st of June as the deadline for extending the current transition period, that ends on the 31st of December, the likelihood of Prime Minister Boris Johnson asking for an extension is minimal. Forcefully declaring his adherence to the Brexit deadline may prove to be devastating to the UK economy, with the inability to get an agreement by the December 31st deadline possibly resulting in a collapse of the Pound Sterling.

The Euro has stalled at 2-month highs ahead of the European Central Bank rate decision and press conference on Thursday. Positivity has spurred the EUR/USD exchange rate higher, as the European Commission proposed a Recovery Fund of €750 billion to support the worst hit economies within the trading bloc and economic data begins to show improving business conditions. With market expectations that the ECB will expand the Pandemic Emergency Purchase Programme by €500 Billion on Thursday, failure by the central bank to deliver could see the Euro slide against its major counterparts. 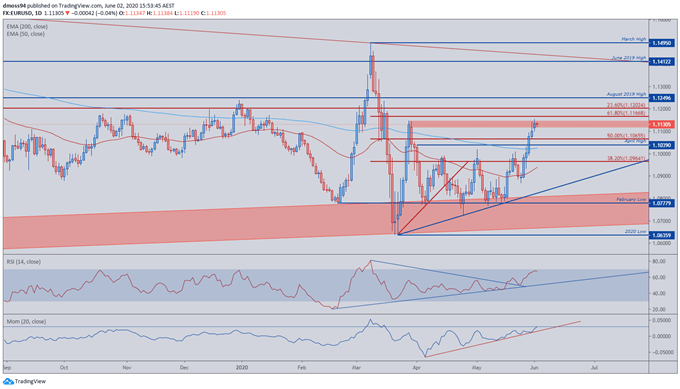 The rally of the Euro against the US Dollar could be in jeopardy as technical studies provide mixed signals ahead of the 61.8% Fibonacci retracement (1.1167) of the March-range. Benefitting from the recent underperformance of the USD against its major counterparts, the Euro has clawed back above the 200-day moving average and surged towards a resistance zone (1.1120-1.1150) which has so far capped upside potential. Prices may look to consolidate in a tight range ahead of the European Central Bank press conference on Thursday with the 50% Fibonacci (1.1066) and the April high (1.1040) supporting prices in the interim. The reaction of the Relative Strength Index (RSI) prior to entering overbought conditions provides a bearish tilt to recent price development, with the oscillator failing to register its second daily overbought reading since February 2018. However, should the oscillator strengthen above 70 into overbought territory, prices may break psychological resistance at the 1.12-handle and the August-2019-high (1.1250) carving a path back to test the March-high (1.1495).