A chipper mood extended from Wall Street into Asia Pacific trade, with the sentiment-geared Australian and New Zealand Dollars leading the way higher alongside regional stock indexes. The anti-risk Japanese Yen and US Dollar dutifully declined.

The most tangible catalyst for traders’ upbeat disposition seems to be diminishing US-China trade war risk. That’s after friendly soundbites from key Washington and Beijing officials crossed the wires alongside news that the two sides will hold a conference call next week.

Worries about re-escalation emerged earlier in the week, triggered by combative comments from US President Donald Trump at a virtual Fox News town hall. He threatened another round of tariff hikes as ‘punishment’ after taking issue with China’s handling of the Covid-19 outbreak.

The prospect of negative interest rates in the US appears to be another active catalyst. Fed funds interest rate futures – a go-to indicator of the market’s priced-in policy outlook – now put the target lending rate below 0 as early as January 2021.

The TED spread measure of USD funding costs dropped as well, hitting a three-week low. It is now just below 21bps, whereas the average after the 2008 global financial crisis is about 33bps. Gold prices tellingly rose as well, flagging a pickup in demand for anti-fiat and non-interest-bearing assets. 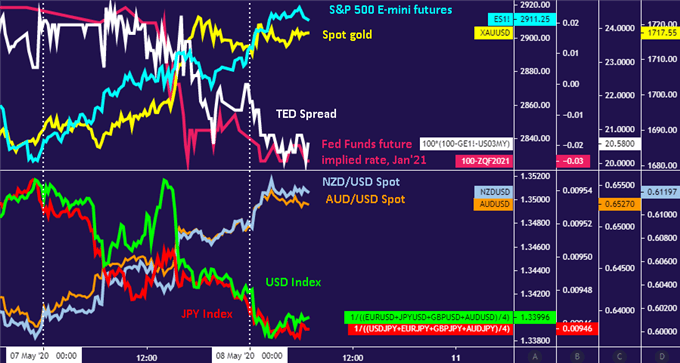 The spotlight now turns April’s US jobs report. It is expected to put the consequences of the coronavirus outbreak front and center, with a staggering 22 million drop in nonfarm payrolls and the highest unemployment rate since the Second World War, at 16 percent.

Nevertheless, the markets are primed for catastrophe, so it will probably take a very meaningful disappointment to rattle traders’ nerves. Absent such an outcome, the risk-on tilt now on display may have scope to carry through into the weekend.

Official commentary surrounding a video-conference meeting of Eurozone finance ministers might spoil the mood a bit however. It is meant to bring progress on creating a region-wide recovery fund channeling a joint fiscal response to recession. Bickering seems likely to ensue however, stalling the effort.