US Dollar and Yen May Rebound on Recession Fears, ADP Eyed

Currency markets were in a relatively chipper mood in Asia Pacific trade. The cyclical Australian, Canadian and New Zealand Dollars rose alongside regional shares, which added about 0.7 percent on average. A sense of unease was palpable however. The anti-risk US Dollar and Japanese Yen were conspicuously steady, suggesting that traders were not prepared to fully commit to a ‘risk-on’ tilt. 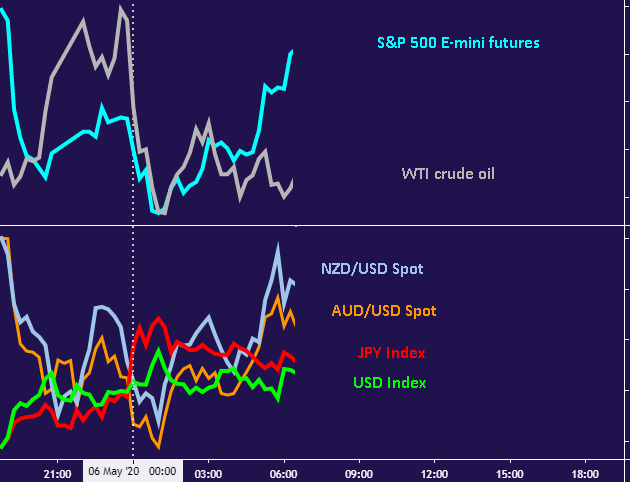 That sense of fragility stands in contrast to upbeat signaling in futures tracking the bellwether S&P 500 stock index. They are pointing convincingly higher ahead of the opening bell on Wall Street, implying a rosy disposition. The calendar is not especially eye-catching, with a string of revised PMI surveys and an economic forecasts update from the EU Commission on offer.

It seems unreasonable to expect that the outcomes on offer will paint anything but a very gloomy picture, given the severe disruption of economic activity amid the Covid-19 outbreak. That may undercut the releases’ market-moving potential. A sense of renewed focus on the emerging global recession seems palpable however, so perhaps the total impact of multiple negative data points has the capacity to trigger a risk-off pivot.

If this scenario does play out, April’s ADP employment data may strengthen the anti-risk argument. It is expected to show that the economy shed 21 million jobs last month. That stands to foreshadow Friday’s official labor market report, which is seen delivering the same result on headline payrolls. Not surprisingly, US economic data has tended to undershoot forecasts, warning that these dire bets may be too timid.