The Canadian Dollar led the way higher, in a move that seemed to be linked to a spirited rise in crude oil prices. The Australian Dollar was not far behind, helped along by an RBA rate decision that saw Governor Philip Lowe and company hold off from further stimulus expansion.

The anti-risk Japanese Yen, Swiss Franc and US Dollar dutifully retreated against this backdrop. Markets began the week in a downbeat mood but a latter-day recovery brought US shares into positive territory into the close. Hopes for easing Covid-19 containment measures seemed to inspire the reversal. 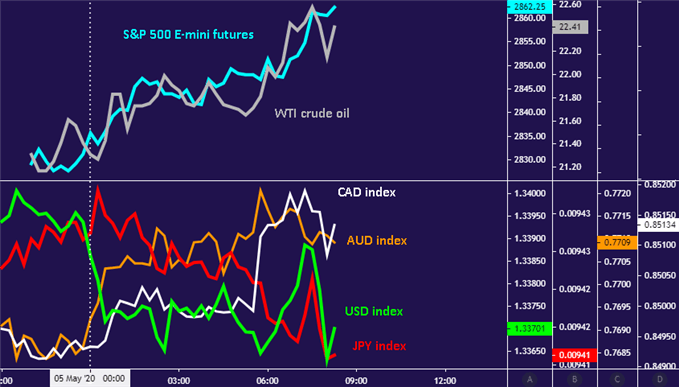 The Euro notably diverged from sentiment-driven trade. The single currency faced heavy selling pressure amid worries about an upcoming ruling from the German constitutional court on the legality of the ECB’s emergency asset purchase program (QE).

An outcome compromising the central bank’s response to the economic malaise triggered by the Covid-19 pandemic might translate into heavy pressure on the Eurozone’s more troubled sovereigns, like Italy and Spain. A surge in borrowing costs there is likely to broadly punish EUR.

It might likewise sour overall sentiment. European shares are on the upswing and futures tracking the bellwether S&P 500 stock index are pointing firmly higher ahead of the opening bell on Wall Street. That ma be reversed if credit stress returns to the Eurozone, with JPY and USD the likely beneficiaries.