Yen, US Dollar May Continue Higher Amid Global Recession Fears

The Japanese Yen outperformed against its G10 FX counterparts as financial markets swooned at the start of the trading week. The similarly anti-risk US Dollar and Swiss Franc were not far behind. Sentiment deteriorated as Asia Pacific bourses followed Friday’s negative lead from Wall Street, as expected at the start of Monday’s session. They shed nearly 3 percent on average.

The news-wires are linking the downbeat mood to combative comments from US President Donald Trump. He said in a virtual Fox News town hall that his administration may move to “punish” China with additional tariffs for some sort of as-yet unexplained wrongdoing linked to the origin of the global Covid-19 coronavirus outbreak. Not surprisingly, the threat of renewed trade wars did not sit well with investors. 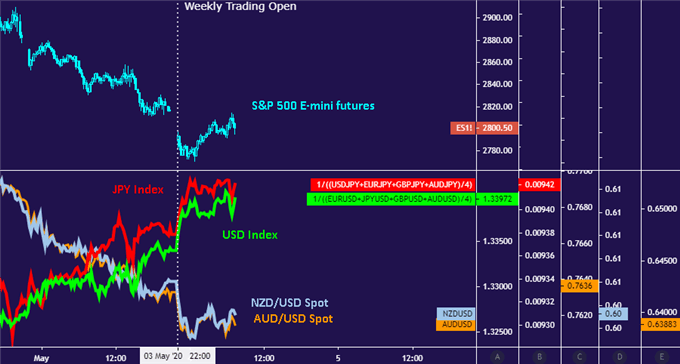 However, risk appetite was already deteriorating when Mr Trump spoke. This means that, while he certainly might have amplified the tilt toward liquidation, he probably did not trigger it. Rather, financial markets may finally be starting to onboard the raft of gloomy economic data and ominous corporate earnings guidance hitting the wires over recent weeks.

Indeed, the consensus forecast compiled by Bloomberg News now sees the global economy shrinking 1.5 percent this year. That is compared with a mere 0.07 percent overall contraction in 2009, the last time that overall output turned negative. It took the better part of a decade for the world to appear as though that setback had been well and truly overcome, at least at surface level. The situation now may be more dire still.

Looking ahead, a relatively quiet offering on the economic calendar seems unlikely to derail sentiment-driven trade. That seems to set the stage for the Yen and US Dollar to continue building higher as the risk-off tone persists. Indeed, European shares are already showing signs of following APAC issues lower and bellwether S&P 500 futures firmly in the red before the bell on Wall Street, hinting at more of the same.