APAC stocks and US equity futures pointed lower early into Asia’s Thursday trading session along with the cycle-sensitive Australian and New Zealand Dollars. The trigger for the risk aversion appears to have been the publication of dismal PMI data out of Australia. This “risk-off” dynamic may have been subsequently amplified by Japan – the fourth largest economy in the world – releasing similarly dismal figures.

The Euro may fall on the highly-anticipated EU leaders summit if officials fail to reach consensus on how to pay for recently-implemented coronavirus emergency stimulus measures. As I outlined earlier this week, Covid-19 may be magnifying what were already-embedded issues pre-dating the crisis that could weaken the politically-sensitive Euro. Get a detailed report of what topics are expected to be discussed here.

April’s preliminary Eurozone PMI data may also pressure the Euro if the outcomes fall The Euro may fall under what are already-low and alarming forecasts amid intra-regional political disputes. Economists estimate that the Eurozone will shrink by a little over 7 percent this year after Europe became the second epicenter of the coronavirus pandemic after China. Here is a breakdowns of the upcoming statistics and their respective estimates and prior figures:

According to the prior PMI survey, the most recent composite reading marked the biggest one-month decrease on record. The report said that “The four largest nations covered by the survey all registered record declines in activity, with Italy and Spain experiencing the sharpest reductions”. Since then, the situation has become more dire and this new dark reality will likely be reflected in the preliminary numbers. 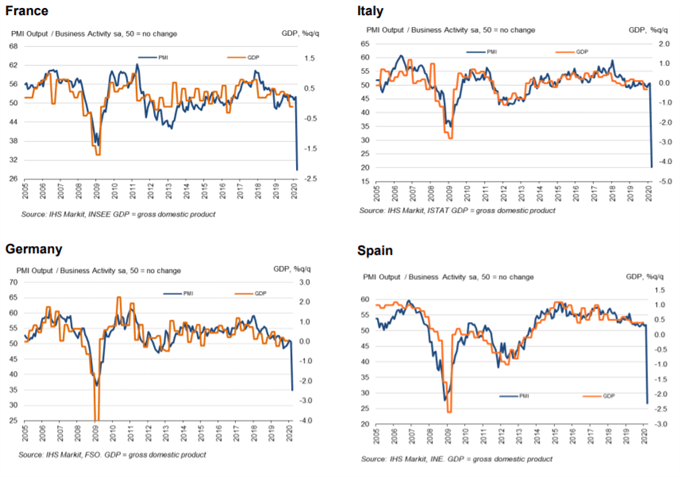 However, the Eurozone is not the only region releasing PMI data. The United States and United Kingdom will both be publishing preliminary industrial, service and composite figures for April. Data out of the US may carry more market weight since it would be not only coming out of the new epicenter of the coronavirus, but also out of the world’s largest economy.

EUR/USD may extend its decline after it was rejected by the lower tier of a key inflection range between 1.0989 and 1.0981. This came despite the pair rendering descending resistance – labelled as “Downtrend Alpha” – as invalidated. EUR/USD may now flirt with frequently-tested support at 1.0783, which if broken could precipitate a longer and deeper selloff in the pair.