The Australian Dollar ticked slightly higher after local GDP data beat expectations after the year-on-year reading showed a 2.2% print, slightly higher than the 2.0% estimate. The quarter-on-quarter twin showed a 0.5% figure, slightly strong than the 0.4% forecast. Asia-Pacific equities were mostly in red as part of a broader risk-off tilt echoing from Wall Street following the Fed’s unexpected 50 basis point rate cut.

However, risk appetite began to show signs of recovery as results from the Democratic Primaries on “Super Tuesday” revealed former Vice President Joe Biden winning Virginia, Alabama and North Carolina. A widening gap between him and Senator Bernie Sanders could alleviate anxiety about the prospect of a Democratic President being elected who brings comparatively more uncertainty in an already volatile environment.

The Euro may retrace some of its gains if a cascade of Eurozone economic data from key member states underwhelms and strengthens the case for ECB easing. PMI data out of Italy, Spain, France, Germany and the overall Eurozone are on deck with the publication of Italian GDP. The latter is expected to confirm a 0.3 percent contraction for the fourth quarter with a growing fear that GDP Q1 data for 2020 will also be negative.

The spread of the coronavirus throughout Europe – which has already been afflicted with geopolitical ailments and weaker growth from structural issues – threatens the region’s economic activity. If GDP data for Q1 2020 in Italy shows another contraction, this will mark the second time in two years that the third-largest Eurozone economy has entered a technical recession (defined as two consecutive quarters of negative growth). 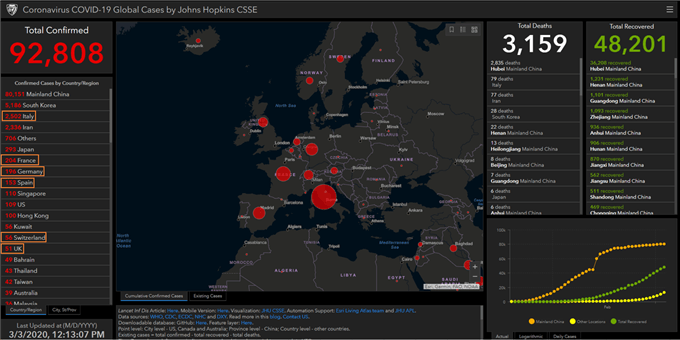 Later today, European Commissioner for Trade Phil Hogan will be giving a speech in Brussels where he will likely touch on progress between the US and EU. While Washington has delayed imposing tariffs against the bloc’s aircraft sector until March 18, the prospect of auto levies remains a fundamental risk. In an attempt to cool cross-Atlantic trade tensions, Mr. Hogan has already visited Washington twice since December.

Following up from my earlier report, EUR/USD has had a remarkable recovery and underlying bullish sentiment may receive another injection of hope. The pair is currently trading on the cusp of former support-turned-resistance (labelled as “Alpha”) which, if met with a daily close could rekindle hopes for EUR/USD’s upside potential. However, failure to trade above it may lead the pair to retreat until it hits the floor at 1.1091. 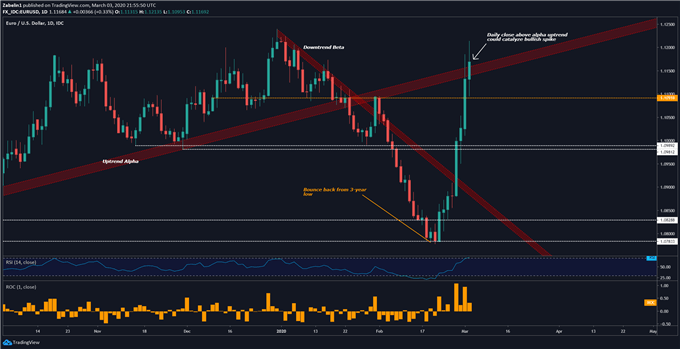