US Dollar May Rise on Key Data: Holiday Spending in Focus

Japanese month-on-month core machine orders clocked in a new high at 18 percent for November, the highest reading recorded. APAC equities edged higher along with the risk-oriented Australian Dollar from what appeared to be a knock-on effect from optimism during Wall Street echoing into Asia. This came as Chinese VP Liu He said that he projects growth for 2019 to be above six percent, according to Xinhua News Agency.

The US Dollar may get a boost from retail sales figures if the statistics undermine Fed easing hopes. This comes despite the central bank’s frequent reiteration that barring any “material” changes to economic activity, interest rates shall remain at their current levels. The retail sales figures from December will be particularly important to watch given how they may provide insight as to the strength of the consumer during the holidays.

Month-on-month estimates ex-auto are expected to grow 0.5 percent, notably higher than the prior 0.1 percent print. The reason why this particular indicator at this time may elicit significant US Dollar volatility is because it may reveal how bold – or timid – consumers were feeling over the holidays. Something to bear in mind: consumption makes up over 70 percent of the US economy.

Fed officials have noted that the consumer has remained the primary force keeping the world’s largest economy afloat despite the pullback in industrial output amid the US-China trade war. Therefore, if weaker economic statistics are reported, it could send a chill up the spine of investors and inflame 2020 Fed rate cut bets and push USD lower. Watching consumer-related data therefore is crucial; and housing may be one of them too.

Overnight index swaps are currently showing that markets are pricing in an overwhelming expectation of at least a 25-basis point cut by year-end. However, if critical economic statistics – like retail sales – continue to buttress the central bank’s case for holding rates, it could push the US Dollar higher. The alleviation of trade war angst may also amplify this effect, but given the key caveats in the accord, talks could get derailed.

As noted in my prior piece, EUR/USD appears to be staging an attempt at re-saddling the December uptrend – now resistance – it previously broke back on January 8. Failure to clear the zone with follow-through could be met with disappointment and result in a retreat to support at 1.1121. However, given the US Dollar’s erratic nature recently, the upcoming statistics may have a mixed effect on the EUR/USD exchange rate. 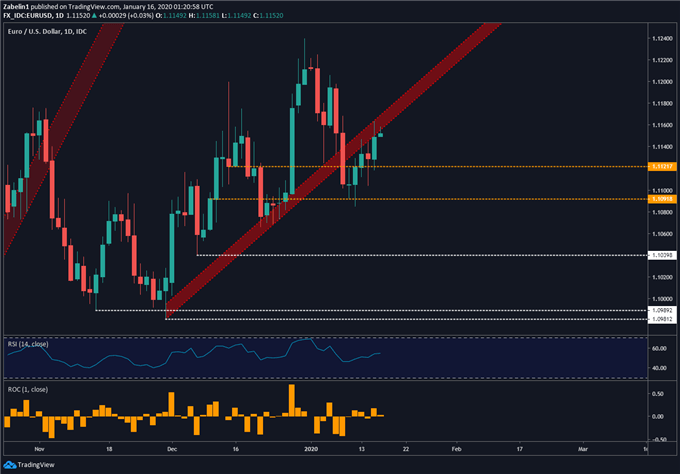