The British Pound may fall in the coming days as no-deal Brexit fears continue to swell amid thin market liquidity as traders take off for the holidays. Downside pressure is also possibly being amplified by investors offsetting their long positions and cashing in before the year ends. As it stands, between now and January 1, there may be more scope for downside potential than upside swings.

The market-friendly UK election was welcomed by the British Pound, though the relief rally was quickly cut short after Prime Minister Boris Johnson sent a chilling message. He recently announced that he intends on legally blocking an extension of the transition period beyond the official December 31, 2020 deadline. If Mr. Johnson fails to secure a trade agreement by then, the UK may crash out of the EU with no trade deal.

Much like in 2019, the British Pound will likely be primarily moved by Brexit-related developments and how they affect the probability of a no-deal outcome. For now, policymakers are focused on meeting the January 31 deadline and then will begin to look at future trade relations with the EU. However, officials from Brussels doubted the ability of UK lawmakers to strike a trade deal in less than a year.

This is because trade agreements typically take a longer time to design and implement since the process requires rigorous deliberations. According to studies from UC Berkeley, the average trade agreement takes 28 months to make, more than twice the amount of time Mr. Johnson is allocating for his negotiations with EU lawmakers. So naturally, it is not surprising that markets have seen a recent selloff in the British Pound.

Following GBP/USD’s relief rally on the UK election, the pair experienced its largest one-day drop since November 15, 2018. The pair is now trading in a familiar congestive range between 1.2816 and 1.2769 where it traded sideways when UK lawmakers campaigned ahead of the December 12 election. Looking ahead, the pair may trade within this zone until after the holidays are over. 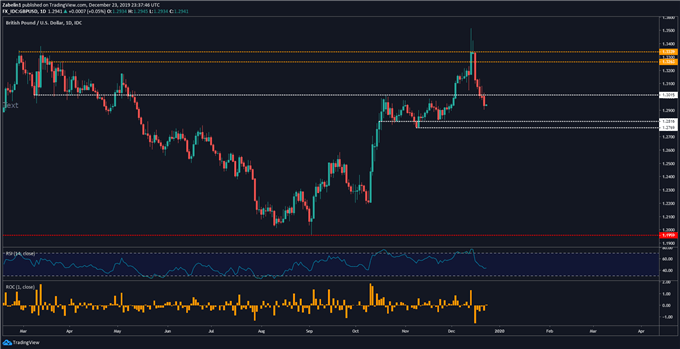