The Euro may fall against the US Dollar if German IFO data spooks regional investors and causes EUR/USD to retreat from key resistance. A selloff in the Euro may be amplified by escalating EU-US trade tensions amid a period of relative calm between Washington and Beijing. The United States Trade Representative Robert Lighthizer recently gave an alarming announcement about new trade policies aimed at the European Union.

German IFO business climate, expectations and current assessment readings are anticipated to show a 95.5, 93.0 and 98.1 print, respectively. While the estimates are higher than the prior releases, in a historical perspective, they remain at alarming levels. In addition to being on a downtrend since the start of 2018, the data has been edging closer to levels not reached since the Eurozone debt crisis and 2008 crash before that.

EU-US trade tensions remain high following US President Donald Trump’s threat to impose retaliatory tariffs against France after Paris announced it was imposing a new digital tax. France subsequently responded that it is ready – and unified with the rest of the EU – to implement retaliatory measures if the US strikes first. Euro traders shudder at this thought considering the various economic levers the US has at its disposable.

Furthermore, Trump’s recent “victory” with China over its phase 1 trade deal may now embolden the Administration to take a similar approach across the Atlantic. Mr. Lighthizer made it clear that Washington is not pleased with the multi-billion-dollar trade deficit with the EU and wants to narrow it. He also declined to speculate as to whether or not European autos will be excluded as a possible tariff target in future negotiations

EUR/USD has risen a little over 1.50 percent after the pair hit the early-December swing-low at 1.0981 and a recent re-test of a range resistance zone between 1.1165 and 1.1182. EUR/USD may retreat to support at 1.1121, opening the door to test another floor below it at 1.1039 if the data’s magnitude is able to catalyze a significant enough selloff and drop below former support 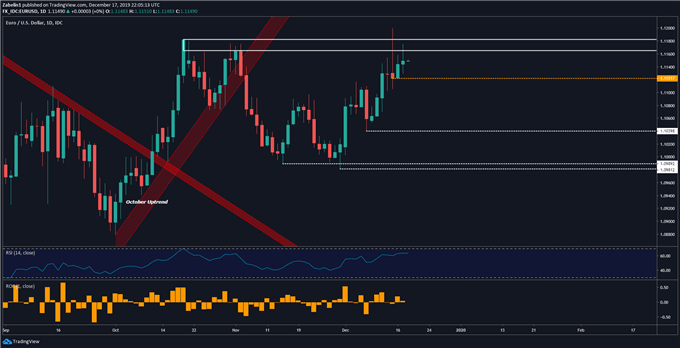