The Euro may fall if Eurozone GDP and jobs data sours sentiment and incites ECB rate cut bets as EU-US trade tensions rise amid a world-wide industrial recession. Regional growth continues to face headwinds from both an unfavorable external environment and unresolved internal structural issues. The upcoming data may only reinforce the gloomy outlook for the Eurozone and pressure the Euro.

The final print for Eurozone 3Q GDP data is expected to show a 1.2 percent print, unchanged from the prior period. Growth has taken a particularly sharp turn lower around the start of 2018 as international trade tensions flared up and pressured the ECB as it was signaling it would end its bond-purchasing program. However, stress from the prevailing economic conditions forced the ECB to resume its QE program indefinitely.

Unemployment data has also been showing an alarming downward trend around the same time GDP data was beginning to decline. Throughout most of 2018 and 2019, Europe was also dealing with political turbulence emanating from Italy as Rome and Brussels wrestled over the former’s budgetary ambitions. This also occurred against the backdrop of anxiety over a resolution to Brexit amid the European parliamentary elections.

Amid the political and economic turmoil in Europe, ECB easing expectations began to build as the urgency for looser credit conditions grew amid deteriorating fundamentals. While the desire for more stimulus is comparatively lower than it was in late 2018 and early 2019, it may return if chronic underperformance in economic activity warrants additional liquidity provisions.

Low Rates Have Taken Their Toll on the Euro

The desire for ECB easing may rise in the coming weeks as the EU and US wrestle over new tariffs. US President Donald Trump recently proposed a list of levies – with some as high as 100% – against French imports ranging from cheese to luxury items. This comes in response to France’s digital tax which Washington believes specifically targets US companies. European officials have responded with a threat of retaliation.

Despite EUR/USD’s magnificent recovery on December 2, the pair’s conquering of resistance-now-turned-support may be a short-lived victory. The pair’s recent price action suggests traders are reluctant to continue higher as the fundamental outlook – as outlined above – overwhelmingly supports a bearish bias towards EUR/USD. 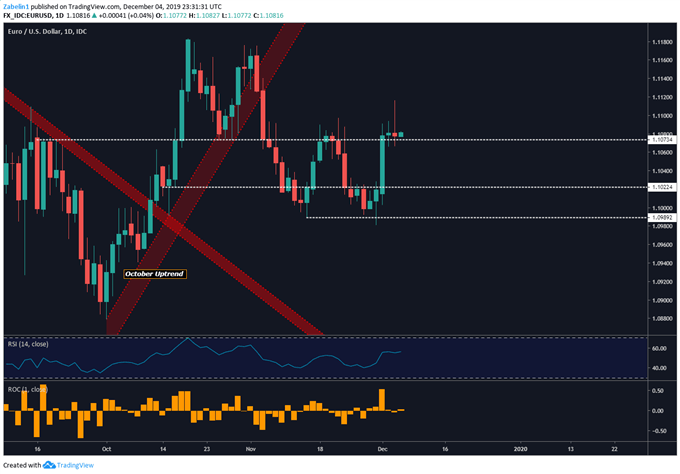