The New Zealand Dollar fell against most of its major counterparts and dragged AUD with it after two-year inflation expectations for Q4 showed a softer price growth projection ahead of the RBNZ rate decision. The 1.80 percent figure failed to meet and exceed the prior 1.86 percent print, prompting sellers to unload their Kiwi exposure as the prospect of a rate hike was pushed further down the line.

German ZEW Survey Expectations and Current Situation are expected to show -13 and 22.3 prints, lower than their prior releases at -22.8 and -25.3, respectively. The dismal nature of these indicators is reflective of a broader weakness in European growth as the continent contends with trade wars and internal political strife. Inflationary prospects continue to remain gloomy despite the ECB’s rate cuts and introduction of QE.

As the largest economy in the Eurozone, German data commands the attention of traders because of the impact its growth trajectory has for the entire region – although recently France has been outperforming Germany. Economic indicators coming out of the former have been printing at levels not seen since either the Eurozone debt crisis or the 2008 financial crash. A poor data print may therefore spook investors and lead to a selloff in the Euro.

The data may also accentuate EUR/GBP’s decline after the pair broke below the lower bound of the 0.8597-0.8642 congestive range its been stuck in since October 16. However, positive RSI divergence signals that upside momentum is picking up. Traders may closely watch how this technical conflict manifests itself. Looking ahead, if the downside breakout is met with follow-through, it may prompt a selloff until the pair hits support at 0.8491. 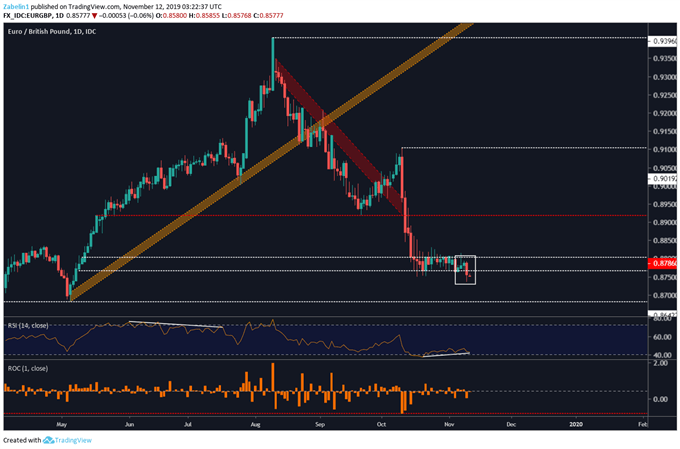