The Hang Seng Index gapped over 1.3 percent lower at the start of Monday’s trading session. The decline appeared to have come from fading optimism over a US-China trade war resolution and an escalation of violence in Hong Kong amid the ongoing protests. Last Friday, US President Donald Trump announced that he may not roll back tariffs in lockstep with the completion of the multi-sequential trade agreement.

The British Pound may fall against its major counterparts if a slew of economic data misses forecasts and pressures GBP. A severe underperformance – particularly in preliminary 3Q GDP data – could make more BoE policymakers tilt towards favoring a rate cut even before the outcome of Brexit is determined. Chronic political fatigue has sapped upside inflationary pressure and undermined business and consumer confidence.

At last week’s BoE rate meeting, the British Pound ended the day in the red after it was revealed that only seven members of the nine-person committee agreed to hold rates at 0.75 percent; the other two defected and advocated for a rate cut. Inflation has been tracking below the Bank of England’s two percent target – so why has the BoE not cut interest rates?

One word: Brexit. The economic and financial implications of a no-deal outcome may require the central bank to use all of its monetary ammunition as a way to cushion the impact. As such, officials may want to hold off on making a rate decision prior to the political outcome. However, if economic activity continues to decline, it could pressure more policymakers to favor a rate cut.

A market-moving political event that will likely gain traction as the deadline approaches will be the December 12 UK elections. The official campaign season started only last week, though polls are already showing that support Prime Minister Boris Johnson’s Conservative Party remains at roughly 40 percent. The Labour Party is up one point to now 30 percent according to a Panelbase poll conducted between November 6-8.

Looking ahead, volatility in GBP may remain relatively tame until there is a clearer picture on which party will emerge triumphant. However, the parameters for victory rely not only on getting more votes than the competition but by also being able to secure an outright majority. That would in turn make passing a Brexit deal far more likely than trying to push it through a divided Parliament.

GBP/USD is now hovering between the 1.2751-1.2816 support range and may aim to break the lower bound with an eye at the 1.2708 floor. The pair’s decline came shortly after negative RSI divergence showed that upside momentum was fading alongside overly-hyped hopes for avoiding a no-deal Brexit. Looking ahead, traders may wait to enter a short position until 1.27078 is broken with confirmation. 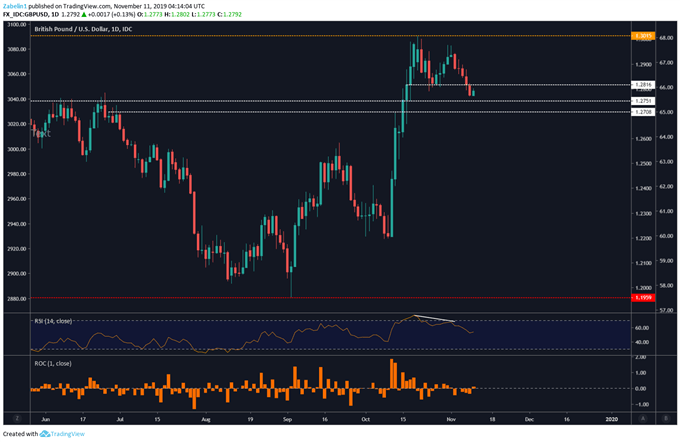 Since October 16, EUR/GBP has remained in a congestive range between 0.8597-0.8642, though positive RSI divergence signals that upside momentum is gaining which could possibly lead to a test of the upper bound. However, fundamental catalysts – such as the upcoming data avalanche – could result in a GBP selloff which may see the pair shy away from its upside ambition – at least for now. 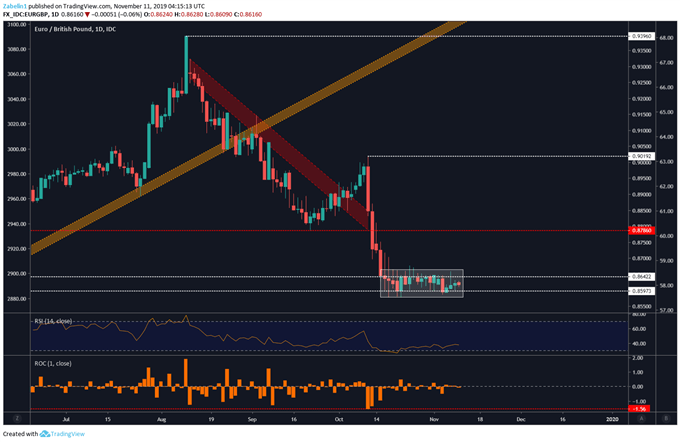 Chart of the Day: Brexit Timeline 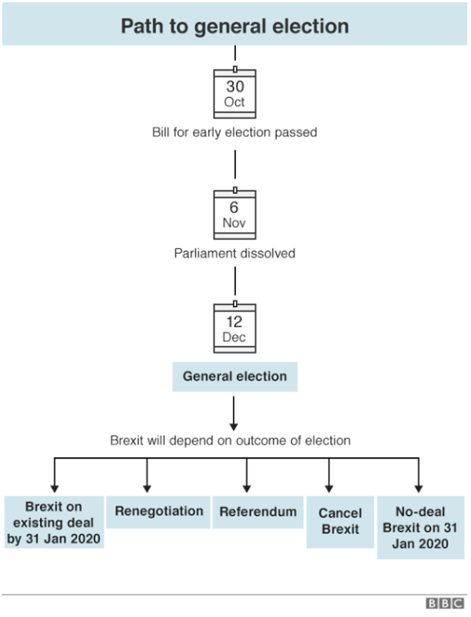