The Canadian Dollar may fall ahead of the Canadian federal election. Liberal Party Prime Minister Justin Trudeau is in the fight for his political life as the leader of the Conservative Party Andrew Scheer closely follows the incumbent in the polls. The most likely result – and one which markets have priced in – is that government will not be able to secure an outright majority.

Parliament is therefore likely to be more fragmented this year which could force Mr. Trudeau’s party to rely on smaller groups for support. A fragmented legislature will make it more difficult to pass laws and stimulative policies which may be needed soon if the global economy continues along its current trajectory. As a major oil-producing country, the petroleum sector is facing more pressure from weakening global demand and regulatory barriers from Mr. Trudeau’s government.

This is where markets may cheer Mr. Scheer’s arrival over the incumbent. The conservative leader has portrayed himself as a friend to the oil industry and favors pro-growth policies while Mr. Trudeau’s government struggles to strike a balance between its environmental objectives and supporting a key industry. The Canadian Dollar and benchmark TSX equity index may therefore be more receptive of Mr. Scheer.

Year-to-date, the Canadian Dollar is the best performing G10 currency with 4.90 percent total returns. However, if Mr. Trudeau triumphs, it could put CAD’s performance this year at risk if it stokes fears that the government will have to rely on smaller parties that prioritize environmentally-minded over growth-oriented policies that are primarily built on the back of the petroleum industry.

Market Analysis of the Day: Will Federal Election Catalyze or Stave off USD/CAD’s Retreat to Key Support Range? 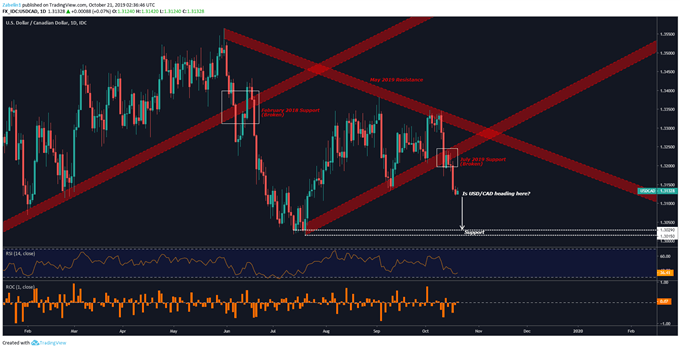