The British Pound may pare some of its recent gains if official commentary at the much-anticipated EU-summit undermines hopes for an orderly Brexit. The concern is whether UK Prime Minister Boris Johnson will be able to gain support at home in a fractured Parliament where his party lacks a majority by 40 seats. On the other hand, EU officials appear cautiously optimistic that a deal can be drafted and approved by Thursday.

If the EU approves Mr. Johnson’s proposed deal, the House of Commons would have to give it the stamp of approval at a special meeting on Saturday. If Parliament sanctions the Prime Minister’s plan, a short delay following October 31 may be required in order to finalize the agreement. But the biggest obstacles in reaching a Brexit deal remains over resolution on the issue of the Irish backstop.

Why is the Irish backstop so important to Brexit negotiations?

Winning over the heart of the Irish Democratic Unionist Party is crucial for Johnson to secure if he is to push a deal through the House of Commons. Securing their support may very well be the only way a deal is reached. Mr. Johnson has adamantly expressed his intent on leaving the EU on October 31, but a bill passed this year compels the PM to ask for an extension if he cannot get a deal done by the end of the summit.

However, Mr. Johnson said that he would “rather be dead in a ditch” than prolong the UK’s departure. With the October 31 deadline approaching, Irish Prime Minister Leo Varadkar has offered the possibility of holding an emergency summit if there was no progress made at the meeting this week. The EU is also considering holding its own summit where it is mulling over extensions ranging from a month to possibly over half a year.

GBP/USD is now trading at a five-month high, though the pair may soon look to retest support at 1.2708 if Brexit hopes fade. Conversely, political optimism may send the British Pound higher vs the US Dollar, though upside momentum may encounter friction at the 1.2978-1.3004 range. Note of caution: political volatility may keep traders from committing capital until there is more clarity. 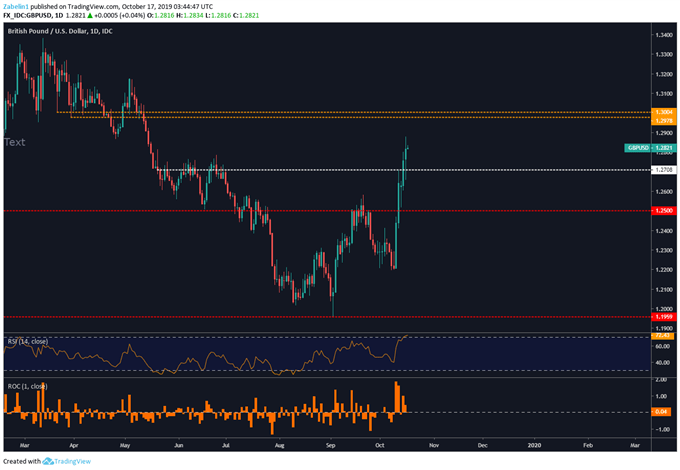