US Dollar May Recover Versus Euro, Pound if Trade Talks Falter

A pickup in sentiment on Thursday sapped the appeal of safe havens and thus the highly-liquid US Dollar. Bets of a positive outcome in US-China trade talks sent the S&P 500 higher on Wall Street. Relatively speaking, the Euro outperformed against the Greenback but it was the British Pound that took first place. Progress between UK Prime Minister Boris Johnson and Irish PM Leo Varadkar cooled “no-deal” Brexit fears.

Heading into the remainder of the week, the British Pound is still vulnerable to stray headlines around the EU-UK divorce. In fact, as derived from options trading, one-week GBP/USD implied volatility is at 15.35% which is the highest since April. Towards the end of next week, EU leaders will be gathering in Brussels for a Summit to discuss Brexit as the withdrawal deadline approaches on October 31.

Focusing on the remaining 24 hours, the Euro may look past the finalized reading of September German inflation data. All eyes are on the outcome of US-China trade talks. President Donald Trump will be reportedly meeting China’s Vice Premier Liu He at 18:45 GMT. A collapse in talks that paves the way for additional tariffs risks denting market mood, boosting USD and overshadowing University of Michigan Sentiment data.

The decline in the DXY Dollar Index over the past 24 hours meant that it closed under near-term rising support from the middle of September. But, the dominant uptrend is being held intact by rising channel support from the end of June – red parallel lines on the chart below. If this psychological barrier holds, it may pave the way for a bounce back towards September highs. 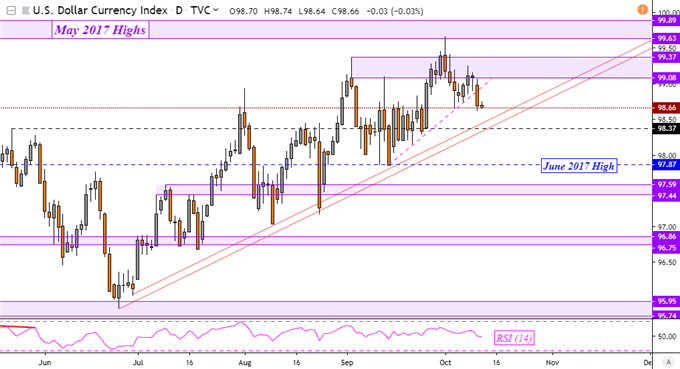