Asia-Pacific markets began with a politically-volatile day with the UK Parliament debating Brexit. After a heated exchange between opposition leader Jeremy Corbyn and Prime Minister Boris Johnson, lawmakers voted down a motion to hold an election prior to the October 31 deadline for the EU-UK divorce. Chinese CPI and PPI data came in higher-than expected and pressured the Australian Dollar against its major counterparts.

As part of a global trend, China – the world’s second-largest economy and Australia’s largest trading partner– has been weakening in part due to the trade war with the US. This has prompted the PBoC to implement stimulative policy measures. As such, when local price growth data came in higher-than expected, markets became worried that the central bank may water down future monetary stimulus measures, limiting scope for efforts that might've stoked demand for Australian exports.

Euro volatility has been relatively tame this week in light of the upcoming ECB rate decision and commentary from soon-to-be replaced president Mario Draghi. Traders may be reluctant to commit capital prior to the announcement due to the uncertainty around the event. The key point of interest will be whether Mr. Draghi meets the markets’ lofty expectations or if he disappoints investors’ hopes for aggressive easing.

Swedish Krona traders will be closely watching the release of local CPI data, especially after the recent Riksbank rate decision where the central bank stated they still plan to raise rates at least once this year. However, considering the ECB may deliver significant stimualtive policy measures amid slower regional growth, the outward-facing Swedish economy may too require a boost if upside CPI pressure is waning.

Chart of the Day: China CPI Tops Forecasts, Pressure AUD as Fears Grow of a Watered-Down Stimulus from PbOC 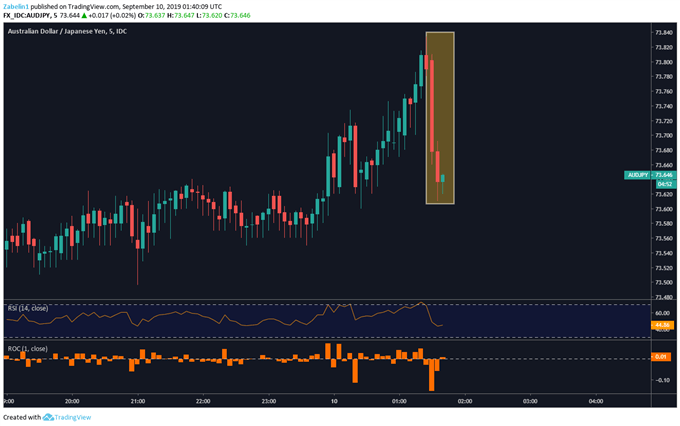