The Australian and New Zealand Dollars along with the off-shore Yuan got a boost after news broke that China and the US will be holding trade talks in Washington in the early part of October. The rise in risk-on assets comes as geopolitical tensions surrounding Brexit, the Hong Kong protests and uncertainty in Italy all cooled and was subsequently reflected in an ethereal optimism by market participants.

Meanwhile, anti-risk assets like the US Dollar, Japanese Yen and Swiss Franc were underperforming relative to their peers, especially CHF. As the region’s de facto haven – apart from German bunds – a notable decline in its demand perhaps signals that European-based political risk is waning in the eyes of traders. This likely has to do with progress made towards avoiding a no-deal Brexit and the formation of a new Italian government that avoided a snap election and the ascendancy of Matteo Salvini to Prime Minister.

Up Next: Will US Factory Orders Data Boost Fed Rate Cut Bets, Pressure US Dollar?

The US Dollar may fall against the Euro if US factory orders data falls short of expectations and bolsters the case for Fed to implement loose credit conditions. Economists are estimating a 1.0 percent increase for July, slightly higher than the 0.6 percent rise in June. This data in particular may garner more attention in light of Fed Chairman Jerome Powell’s comment on factories at the recent Jackson Hole symposium.

This comes after relatively soft US data on Friday and comments from Dallas Fed President Steve Kaplan who said risks to the central bank’s forecasts are tilted to the downside. This was preceded by Boston Fed President Eric Rosengren’s comment that “easing aggressively” would be appropriate if growth risks materialized. However, he added that these elevated threats are not yet reflected in the data.

US Dollar crosses have been broadly falling as a result of mass political détente and revived optimism about China-US trade talks. Investors are therefore now appearing to find holding highly liquid anti-risk assets like USD less attractive. However, given the track record of trade negotiations between Beijing and Washington, traders may be hesitant to commit capital given how talks have been so easily derailed in the past. 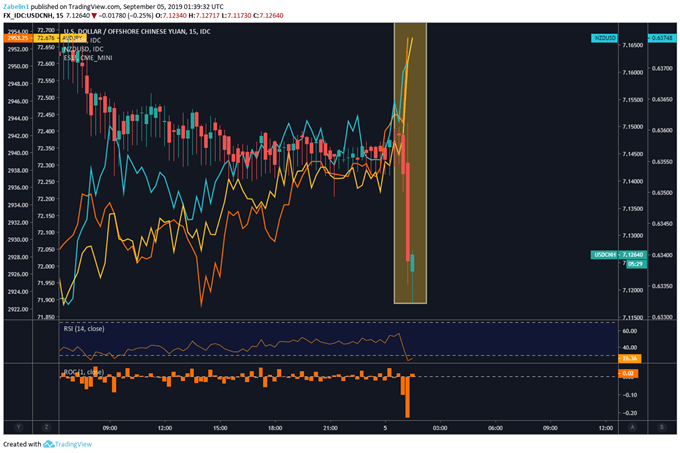