The Euro may fall against the US Dollar after Italian Prime Minister Guiseppe Conte’s speech. Analysts are expecting for Mr. Conte to resign after relations between deputy prime ministers Matteo Salvini of the Lega Nord and Luigi di Maio of the Five Star Movement’s crumbled. The reintroduction of Italian political uncertainty is a bitter fruit markets may have to swallow against the backdrop of rising recession fears.

During the 2018 election, Italian 10-year bond yields spiked along with other Mediterranean sovereign debt amid fears that Europe’s third-largest economy may plunge the continent into another regional debt crisis. The Euro suffered against its anti-risk counterparts like the Japanese Yen, US Dollar and Swiss Franc while US Treasuries and German Bunds saw significant capital inflows.

Against the backdrop of a weakening global economy and grow recessionary fears, the impact on financial markets from the political shock may be amplified by the underlying economic weakness. This is especially true of Europe which has been plagued by a flood of Eurosceptic-nationalism that threatens to undermine the Eurozone’s political and economic foundation.

Looking ahead, Mr. Salvini may take the opportunity to consolidate power with his party and right-wing allies as their popularity – reflected in polls – shows strength. If he manages to ascend to the position of Prime Minister, we may see a similar reaction as we did in 2018, but possibly with greater volatility. Italy’s fiscal budget is due in October, and it is unlikely Mr. Salvini will again capitulate to the EU’s budgetary rules.

Pioneering fiscal exceptionalism will likely be a familiar headache for European policymakers and investors alike if Rome and Brussels continue their budgetary battle saga. It is unclear how much the continent can endure a shock like this one, especially after news broke that Germany is preparing stimulative policies measures as a contingency for a crisis. To say it another way: Europe’s largest economy is getting the jitters.

CHART OF THE DAY: A Familiar Pain May Make a Reprise – Only with Greater Volatility 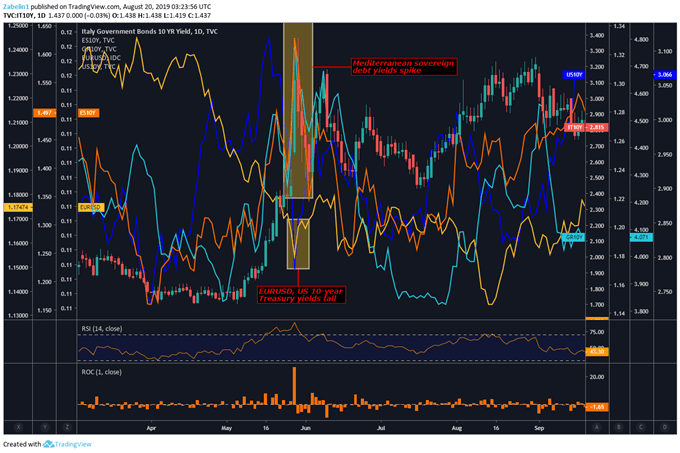