US Dollar May Rise on Trump EU Trade Announcement

Early into Friday’s Asia Pacific trading hours, equity markets gapped lower after a series of volatility-inducing news events continued to break headlines. Trade tensions between Japan and South Korea rapidly escalated with authorities in Hong Kong announcing martial law to quell the protests. News also broke that US President Donald Trump will be making an announcement on Friday at 1:45 pm on EU trade.

US President Donald Trump is set to make a major announcement about EU trade on Friday 1:45 PM. Political and economic relations between Washington and Brussels has been under serious strain since the implementation of the steel and aluminum tariffs in 2018. European policymakers and investors now fear that Mr. Trump may impose an auto import tariff and pressure Germany’s already-slowing economy.

US non-farm payroll data for July may also catch the attention of traders before Mr. Trump makes his announcement. Estimates are currently pegged at a 169,000 increase for the month, lower than the previous print at 224,000. Data out of the US has been tending to underperform relative to economists’ forecasts, so it would not be surprising if US non-farm payroll data fell in line with this trend.

On Thursday, the Bank of England announced it was holding rates at the 0.75 percent benchmark, though commentary from Governor Mark Carney was anything but comforting. In line with his comments at the June meeting – only now characterized with stronger undertones of worry – he warned about risks associated with Brexit, adding that growth lost during the negotiation process and uncertainty will not return.

Mr. Carney also highlighted the impact of trade tensions on growth and admitted the effect has been larger than expected. This echoed a similar message put forth by Fed Chairman Jerome Powell who also warned that policymakers have to assess the impact of trade war in a “new way”. Predictably, Mr. Carney also said that volatility in financial markets have been primarily the result of Brexit uncertainty. 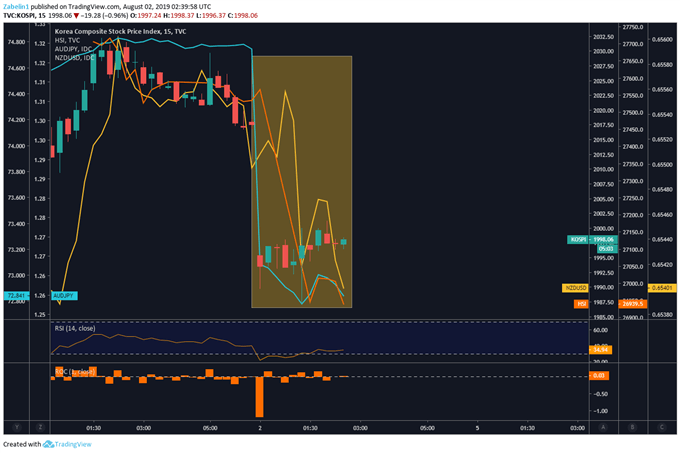