As forecasted, the Fed did not meet the market’s ultra-dovish expectations that resulted in the US session ending with a stronger US Dollar and a dented equity market. Despite the central bank providing a 25 basis-point cut, market participants were disappointed that Fed Chairman Jerome Powell did not deliver the dovish outlook they were hoping to receive.

Mr. Powell stressed the rate cut was not necessarily the start of an easing cycle but was rather a stimulative measure aimed at insuring against downside risks and moving inflation closer to the Fed’s goal. The Chairman highlighted trade uncertainty as being more prominent than expected and that it is a risk policymakers have to assess in a new way in light of the US’s pivot from pioneering trade liberalization to pushing protectionism.

The Fed appears to be re-emphasizing data dependence for determining the necessity of future rates. He also sent out a strong message to investors who are hoping for more easing by warning them not to assume that the central bank will never hike rates again. This was then followed by him saying he that it would not be just one rate cut and reinforced the neutral outlook he appears to want to convey.

What did Jerome Powell mean when he said the leveraged business sector could amplify a downturn?

US Dollar strength against the British Pound will likely extend into the European session with the pair’s downtrend likely to be amplified by the Bank of England’ assessment of the UK’s growth outlook. The central bank’s forecasts in June had already sent out a chilling message and the upcoming meeting will likely be more of the same – only with more alarming undertones.

With the October 31 Brexit deadline approaching, lawmakers are no closer to finding a resolution than they were a year ago. In fact, it may be worse: the gloomy outlook is amplified by the mere fact that there is now less time to resolve a situation that remains as uncertain as ever. The UK recently announced that it is preparing a multi-billion Pound fund to act as a cushion to the impact of a no-deal Brexit.

With Sterling shackled to Brexit risks and prevailing USD strength from the Fed, it is likely GBPUSD will extend its decline below support-turned-resistance and even below a 2-year floor at 1.2114. A break below with follow-through may accelerate the decline if short traders believe there is more room for downside movement. Given the current outlook for Brexit, this may not be an unfair or imprudent assessment.

CHART OF THE DAY: IS A BREAK BELOW CRITICAL SUPPORT INEVITABLE? 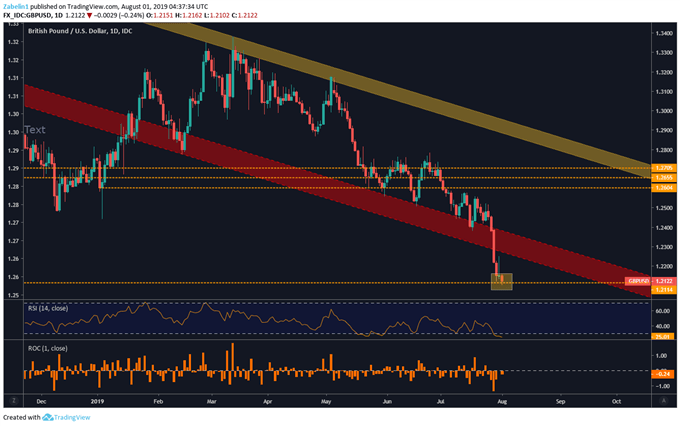