The US Dollar and the British Pound may have a turbulent day tomorrow as Theresa May prepares to announce her successor and heir to the perils of Brexit while the IMF’s publishes an updated World Economic Outlook. The report will likely be underscored by gloomy presentiments and in line with the previous release titled “A Weakening Global Expansion.”

Political contagion of protectionism and trade wars in the developed economies is now spreading to the developing world where inter-emerging market tensions are escalating against the backdrop of a slowing global economy. Furthermore, rising debt levels combined with the proliferation of collateralized loans with abysmal underwriting standards are conjuring a familiar specter, sending a chilling wind across financial markets.

Read more about how leveraged loans could collapse the global financial system.

Risk aversion linked to uncertainty stemming from Boris Johnson’s approach to Brexit may push GBPUSD lower with the IMF’s publication amplifying risk aversion and the pair’s decline. During times of uncertainty, investors place a premium on liquidity and divert capital to haven assets in an effort to mitigate losses. From the downward pressure of Brexit and a stronger USD, Cable may find itself breaking below critical support.

Sterling traders will be biting their nails tomorrow amid a growing downside bias in light of the fundamental environment in the UK. GBPUSD has tested the resistance-turned-support channel before, though the quick bounce back is telling. However, the case for a break below key support exhorts traders to reconsider their trepidation in committing capital that supports a downward bias. In other words: downward pressure expected.

CHART OF THE DAY: CAPITULATION INEVITABLE? 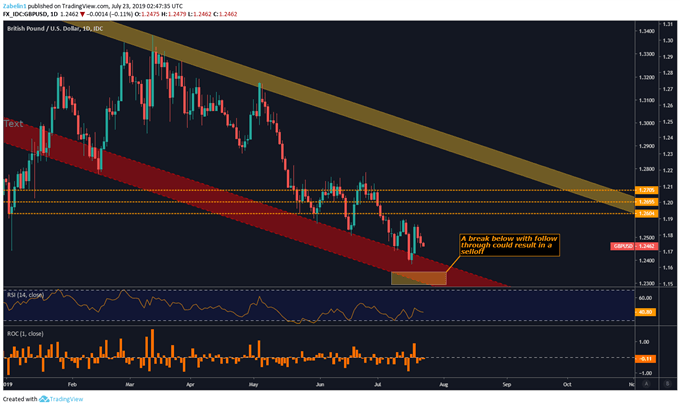