Asia Pacific equities were a mixed, though the Australian Dollar found itself trading lower after Westpac consumer confidence data came in under expectations. The Aussie’s downward move was then amplified by disappointing Chinese PPI data and CPI that came in at the 2.7 percent estimate. As the global economy continues to slow, weaker data out of key world economies will likely continue to persist.

Fed Chair Jerome Powell’s testimony in front of the House Financial Services Committee will be closely watched as he comments on policy and the outlook of the US economy. This comes amid displeasure from US President Donald Trump who has expressed discontent with Powell’s approach to policy. Trump has repeatedly stated that he wants lower rates and has attempted to politicize the central bank.

However, what will likely garner the most attention is the publication of the June 19 FOMC meeting minutes. Depending on the nature of the content, the US Dollar – arguably – may rise if the rhetoric is more dovish or less dovish than expectations. If it’s the former, it signals that economic conditions are poor enough to warrant looser credit conditions which could lead to risk aversion and put a premium on the liquidity king: the USD.

Conversely, if the Fed is less dovish than markets are expecting, capital may also start pouring into the US Dollar and could cause bond yields to tumble along with the S&P 500. US equity markets are likely being buoyed by these dovish expectations because underlying economic growth is not strong enough to push stocks higher, therefore investors have to rely on cheap credit to inflate their assets’ value.

Market participants are currently pricing in three rate cuts from the Fed by year-end while the central bank has hinted that it may implement one rate cut either by the end of 2019 or 2020. The significant disjoint between market expectations and reality will be the epicenter of volatility and will likely cause major equity indices to dip. This may then spill over into Asia and cause APAC equities to echo the move in US stocks.

The Bank of England (BoE) has been catering its monetary policy around the outcome of the EU-UK divorce. The uncertainty about the economic impact of a hard-Brexit against the backdrop of a slowing global economy leaves policymakers in a tough spot. Despite inflation hovering around levels that would normally result in a hike, officials have been holding off on the basis that a premature rate move could destabilize the system.

Industrial production data are expected to show modest expansions, though the reports may fall short of expectations in light of recent revisions to the economic outlook. The UK economy is expected to shrink in the second quarter as the downside risks to the global economy continue to worsen along with a greater expectation of a no-deal Brexit against the backdrop of the ongoing race for Prime Minister.

The event risk above may cause significant distortions in US-Dollar crosses, and particularly with GBP because of the slew of economic data coming out of the UK over the same 24-hour period. The pair’s flirtation with former resistance now-turned support (red parallel channel) signals overall weakness in Sterling in conjunction with rising strength in the USD. Uncertainty about Brexit continues to be a headwind for the pair. 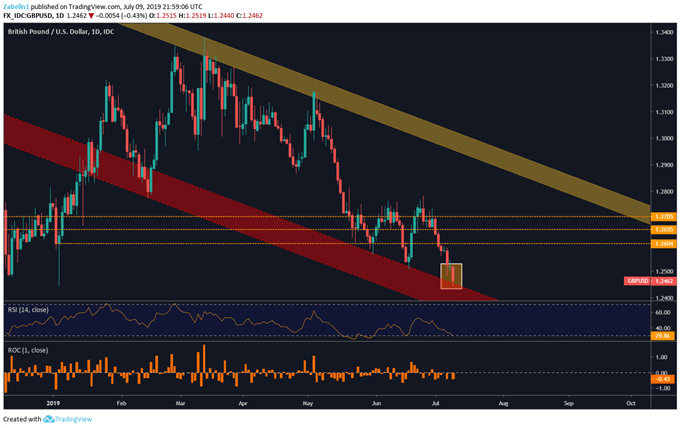