Asia Pacific equities found themselves in the red while the Japanese Yen and US Dollar were broadly higher after risk aversion permeated the market, possibly from disappointing Chinese Caixin PMI data. A contraction in the report may fuel what are already-growing fears that a global recession may be on its way as the world’s largest economies continue to show weakness despite a recent US-China trade truce.

The breakthrough comes as a relief to investors who were beginning to grow uneasy over the EU’s ability to find satisfactory candidates to head these institutions. Nominating leaders to these positions has always been difficult, though the recent polarization of Europe has made it more difficult to find candidates that could satisfy almost all lawmakers on both sides of the aisle in the European Parliament.

EURUSD will be eyeing the release of critical US ISM non-manufacturing/services composite for June with an expected reading of 56.0, marginally lower than the previous 56.9 print. Since US economic data has been tending to underperform relative to economists’ expectations, it would not be surprising if the data fell in line with the broader downtrend.

Growing concern about the trajectory of the US economy has fueled rate cut bets with overnight index swaps pricing in a 100% probability of a cut in this month’s Fed meeting. If the ISM data disappoints, it may boost rate cut bets and could leader to a weaker US Dollar and continue to pressure Treasury yields. Early into today’s trading session, the yield on the US 10-year bond dropped to its lowest point since November 2016.

Swedish Krona traders will be closely watching the release of the Riksbank rate decision. While median estimates are showing an expectation that rates will remain in negative territory at -0.25 percent, volatility in SEK will likely ensue after the commentary. As the global economy continues to contract along with Europe– Sweden’s biggest export destination – Riksbank officials may find it difficult to find a cause to raise rates.

Swedish policymakers are growing increasingly frustrated as global downside risks continue to mount. Despite a temporary truce in the US-China trade war, fundamental risks ranging from Brexit to alarming economic data are undermining any hawkish sentiment in the Nordic country’s central bank. However, maintaining ultra-low rates is also creating its own problems – namely, brewing what could be a crisis.

If the US ISM data underwhelms, it is possible EURUSD will rise from a selloff in the US Dollar amid speculation that it provides greater impetus for a Fed rate cut. Conversely, a better-than-expected reading may undermine EURUSD and push the Greenback higher since it may temporarily cool the urgency of needing to implement lower rates.

However, it is also possible that an underperformance in the data may fuel risk aversion amid deteriorating growth standards in the US and could cause the Dollar to rise as traders seek liquidity in uncertain times. Either way, it seems highly unlikely EURUSD will retest resistance at 1.1347 anytime soon as fundamental headwinds continue to be supportive of a stronger US Dollar as the demand for havens rise.

CHART OF THE DAY: EURUSD HOVERS ABOVE CRITICAL SUPPORT 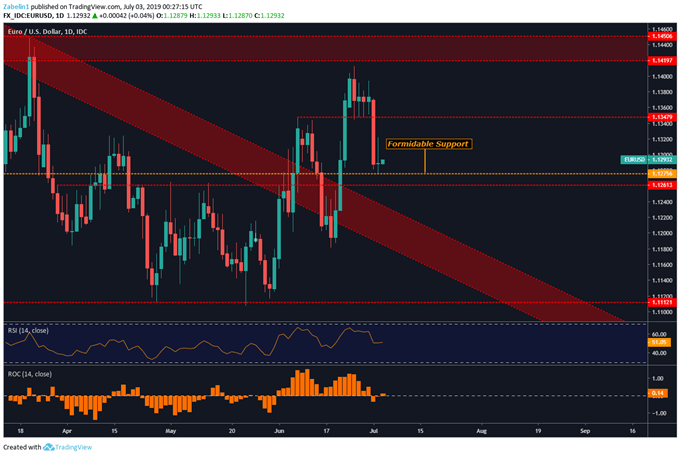