The US Dollar and equity markets will be closely watching a speech by FOMC Vice Chairman John C. Williams where he will speak on the topics of global growth and outlook for monetary policy. Since February, US economic data has been tending to underperform relative to economists’ expectations and the recognition of the wilting US economy is being reflected in a neutral-bordering-on-dovish shift in monetary policy.

As the US-China trade war continued to ravage global markets, the negative ripple effects boomeranged back to the US economy and caused central bank officials – particularly hawks – to pivot toward a more dovish or at the least neutral policy stance. While it is not Jerome Powell who is speaking, commentary from other members can have significant market impacts much like when James Bullard cooled aggressive rate cut bets.

The US Dollar tumbled after Bullard said that a 50-bps cut in July would be “overdoing it”. It is possible that if Williams expresses dovish undertones, it may marginally increase rate cut expectations despite a recent cool-off after the US and China reached a trade truce at the G20 summit Osaka, Japan. The temporary respite from this fundamental headwind sent the US Dollar higher on the basis that it may cause a delay in rate cuts. 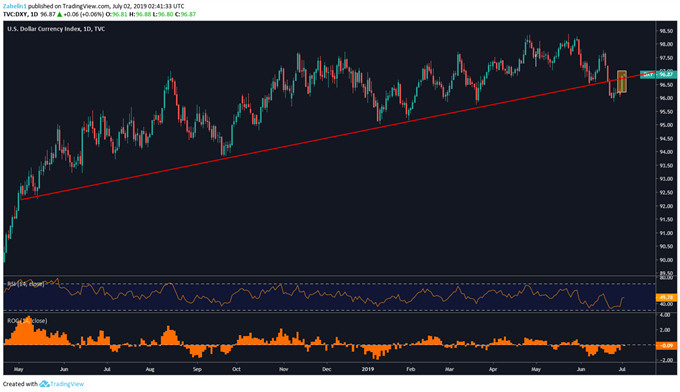