Investors across all corners of the market will have a close on the G20 summit in Osaka, Japan. The main point of focus will be the meeting between US President Donald Trump and his counterpart Xi Jinping. A recent announcement that Beijing and Washington have reached a temporary truce helped lift sentiment and boosted the S&P 500 along with the risk-oriented Australian and New Zealand Dollars.

Trump will also be meeting with Indian Prime Minister Narendra Modi after the two suffered a break down in trade relations after Washington imposed tariffs against New Delhi. Early into Asia Pacific trading hours, Trump said that he will be announcing “very big trade deals” with Modi in addition to meeting with Japanese Prime Minister Shinzo Abe.

Despite all eyes being on the G20 summit, traders may find themselves temporarily diverting their attention to critical US economic data. Namely, the release of the Fed’s favorite economic indicator: the Personal Consumption Expenditure (PCE). Other notable reports will include personal income/spending along with the publication of sentiment data from the University of Michigan.

Since February, US economic data has broadly been tending to underperform relative to economists’ expectations, so it would not be outlandish to see these reports fall in line with this trend. The volatility which may ensue from these publications will likely have more to do with the degree of how well – or how poorly – they perform against expectations. If they disappoint, it only gives the Fed more impetus to slash rates sooner.

This is compounded by the fact that yesterday’s release of GDP data came in at 3.1 percent and missed the 3.2 percent estimate. Furthermore, jobless claims spiked while year-on-year pending home sales contracted to 0.8 percent. The increased frequency of disappointing reports highlights the fact that analysts are overestimating the strength of the US economy. A re-assessment of the actual conditions may be warranted.

The short-term outlook suggests EURSUD will attempt to aim at 1.1419 but the longer-term forecasts still favor a bearish capitulation and possible retest of the descending 18-month resistance channel. Support at 1.1347 may not be as strong as the familiar floor at 1.1275. If US economic data underperforms it could fuel rate cut bets and push the pair higher and this move up could be amplified by positive US-China trade talks.

The upbeat news could cause sentiment to spike and leave investors feeling more risk-loving and may then redirect their capital to riskier and higher-yielding assets with a new rush of a confidence. However, this jolly market mood may be offset when traders sober up and realize that the fundamental outlook still remains bleak. A resolution to the US-China trade will not guarantee re-stabilization of global growth and economic strength.

CHART OF THE DAY: SHORT TERM EURUSD MAY RE-TEST RESISTANCE BUT ULTIMATELY WILL CAPITULATE AND RESUME DOWNTREND 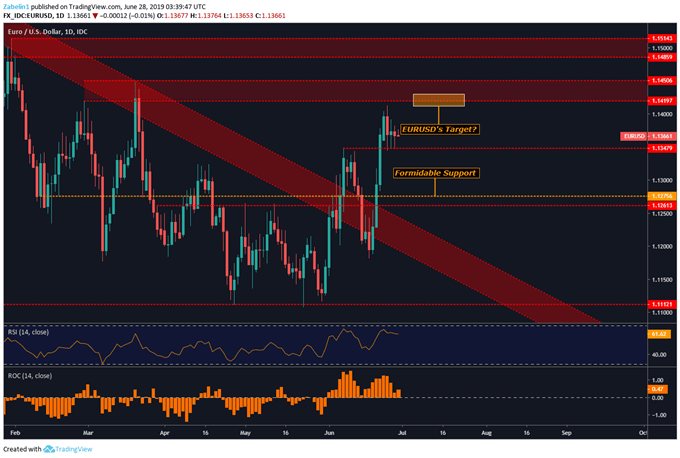