EURUSD Uptrend May be Accelerated by Powell Commentary, US Data

During the Asia Pacific trading hours, the Japanese Yen and the New Zealand Dollar were outperforming their peers. Rising US-Iran tensions induced risk aversion and sent JPY higher, though the cycle sensitive NZD was insulated from the sour market sentiment. Better-than-expected trade data appeared to have been the culprit behind the Kiwi’s resilience, though it may soon fizzle out and succumb to the fate of its peers.

US CONFIDENCE DATA, POWELL’S OUTLOOK ON THE ECONOMY AND MONETARY POLICY

EURUSD’s uptrend may be accelerated if US consumer confidence comes in below the 131.0 estimate and Fed Chairman Jerome Powell’s economic outlook bolsters market expectations of rate cuts. Overnight index swaps are pricing in a 100 percent probability of a cut from the July meeting through year-end. However, rhetoric from the central bank has not indicated that policymakers are feeling dovish to that degree.

However, hawkish members of the Fed are finding it increasingly difficult to justify their position in light of US growth. Since February, economic activity out of the US has been broadly underperforming relative to economists’ expectations – signaling that analysts are over estimating the economy’s strength. Inflationary pressure has also been waning alongside a deterioration in global trade due to the US-China trade war.

There is the possibility that if the Chairman’s commentary is pessimistic enough, it could put a premium on liquidity and cause investors to flock to the US Dollar. However, this would fall out of line with the overall trend of EURUSD’s price action in light of increasing rate cut expectations caused by waning economic growth prospects. The pair’s recent rise has primarily been the result of a weaker Greenback.

After breaking above 18-month descending resistance (red parallel channel), EURUSD has jumped almost two percent and is now approaching what appears to be a ceiling at 1.1424. Poor confidence data and dovish rhetoric from Powell could propel the pair beyond resistance, though the longer-term outlook suggests EURUSD will capitulate and slide lower as risk aversion causes investors to crowd the US Dollar.

CHART OF THE DAY: EURUSD AIMING AT 1.1424 RESISTANCE 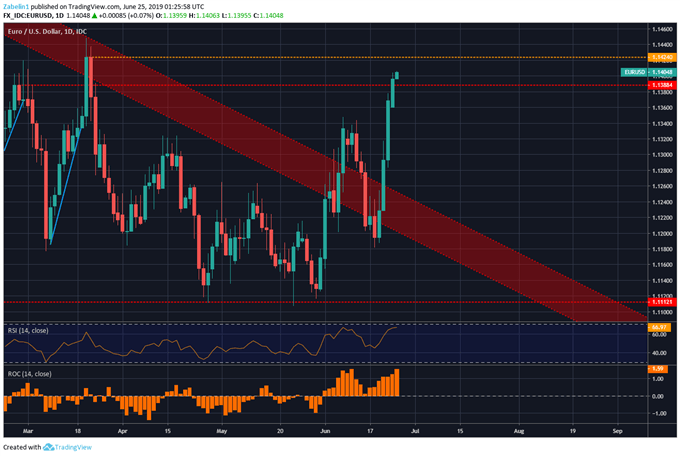