The economic docket in the US and Europe is broadly light, leaving the biggest event risk for the day concentrated on German IFO business data. Last week’s publication of the German ZEW survey severely underperformed and amplified the Euro’s fallwhich was initially triggered by dovish commentary from ECB President Mario Draghi.

The upcoming G20 summit in Osaka, Japan will likely be the major event risk for this week – and not just for the Euro. High-level talks between US President Donald Trump and his Chinese counterpart Xi Jinping will be a point of focus because of the implications it has on US-China trade relations. A sour outcome may push EURUSD lower and could reverse some of the pair’s recent gains if investors suddenly flock to the Dollar.

Despite showing signs of improvement, economic data out of Europe is continuing to disappoint investors. EURUSD traders may get nervous as they re-assess the fundamental outlook. A risk that continues to sap confidence in European markets is the ongoing budget dispute between Rome and Brussels.

Frustrated by the current state of negotiations and the possibility of incurring $4 billion penalty from the Excessive Deficit Procedure, Deputy Prime Minister Matteo Salvini threatened to resign and essentially collapse the current government. That is, unless he is permitted to push through a budgetary provision that allows for a 10 billion Euro tax cut.

The spread between Italian and German 10-year bond yields continues to reflect market participants’ disproportionately higher trepidation in lending to Rome over Berlin. Concerns about a Eurozone debt crisis are growing as the country comes increasingly closer to incurring a multi-billion Euro fine as a result of Italy’s budgetary ambitions that threaten the region’s financial system.

EURUSD broke through an 18-month descending resistance channel, largely as a result of US Dollar weakness caused by increasing rate cut expectations from the Fed. The pair fell just short of 1.1388 and may struggle to break past it. The path of least resistance suggests that the pair will either shy away or will briefly test the ceiling before capitulating.

Since April 2018, EURUSD remains down almost eight percent and the fundamental outlook suggests that if global economic conditions worsen, a premium will be put on liquidity and will push the US Dollar higher. At the same time, officials at the ECB are considering stimulative measures which may pressure the Euro and force it to resume its previous downtrend.

CHART OF THE DAY: EURUSD UPTREND THREATENED BY FUNDAMENTAL RISKS 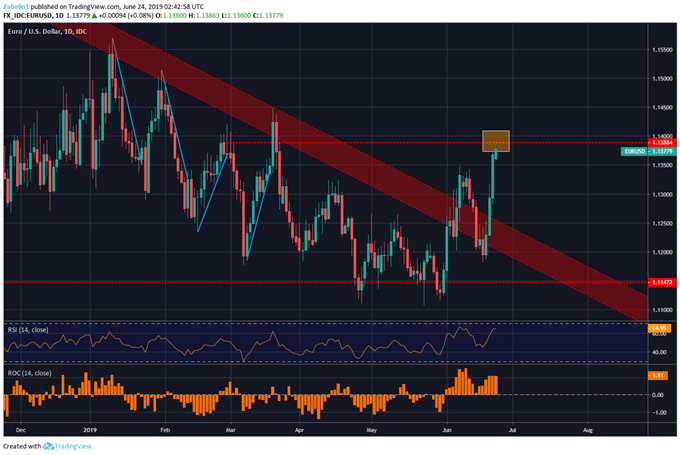