Against what is already a complicated political landscape in Europe, Euro traders will be anxiously waiting for commentary from Eurozone Finance Ministers. Policymakers will be convening to discuss how to approach Rome’s budgetary ambitions and the possible implementation of the dreaded Excessive Deficit Procedure (EDP). This could include a fine of up to $2 billion if Rome fails to alter its budget deficit.

Next to Greece, Italy has the highest debt-to-GDP of any Eurozone member state (130 percent). As such, its fiscal capacities are limited by the regulatory parameters embedded in the Growth and Stability Pact. If relations between Rome and Brussels severely deteriorates, it could drive up borrowing costs for the Italian government as investors place a higher premium for lending money to the sovereign.

The spread between Italian and German 10-year bond yields still remains alarmingly high at 2.655 percent, over 120 percent higher than it was 11 months ago. Increasing geopolitical risks in Europe along with slower economic growth has been fueling uncomfortable – but familiar – fears of another Eurozone debt crisis, only with Italy at the center. Even just the risk of such an event is enough to cause Euro traders to sweat.

While on the topic of familiar fears, the well-worn subject of Brexit continues to be a point of anxiety for European policymakers and global investors. Today, conservative lawmakers in the UK parliament will be holding a secret ballot for 10 candidates who are aiming to succeed Theresa May. If any of the contestants fail to receive at least 17 votes, they are automatically dropped from the race.

Follow the initial vote, next week another ballot will be held with the two most popular rivals “moving to a run-off of Tory party members”. The winner for the position of Prime Minister is expected to be announced during the week of July 22. Firebrand Brexiteer Boris Johnson is unofficially viewed as the frontrunner in the race, leading to greater anxiety among GBP traders that the mode of politics that got him elected may in fact be his undoing, and could lead to the UK crashing out of the EU.

CHART OF THE DAY: GBP/USD EXPOSED TO GREATER LOSSES AMID RISING POLITICAL UNCERTAINTY 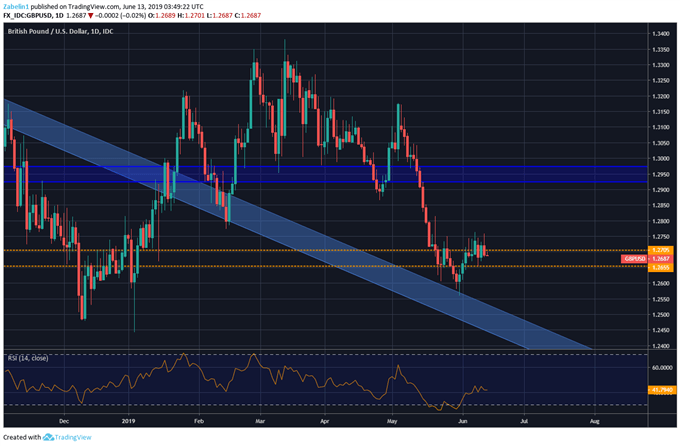