US DOLLAR VOLATILITY AHEAD OF LOCAL GDP DATA

EURUSD traders will be tense ahead of the release of US GDP against the backdrop of souring political tensions between the EU and US over policy toward Iran. Forecasts have annualized quarter-on-quarter GDP at 3.0 percent, slightly lower than the previous reading at 3.2 percent. Advanced goods trade balance data for April will also be released, though it will likely be overshadowed by US GDP.

Since February, US economic data has been tending to underperform relative to economists’ expectations, perhaps signaling that the analysts are overly optimistic over US growth prospects. The weaker-than-expected character of the US economy has caused the Fed to shift from its previously hawkish outlook to more of a neutral approach. This has led to the central bank adopting a wait-and-see mode to determine if prevailing economic conditions warranted a rate hike.

Therefore, GDP data may elicit higher-than-usual levels of volatility because of its potential to shift the Fed away from its neutral approach to one that leans more hawkish or dovish. During this same meeting, Chairman Jerome Powell stated that the temporary lull in inflation was “transitory”. Meaning, if inflationary pressures are reached and sustained at adequate levels, it could give the Fed impetus to tighten credit conditions.

EURUSD is also finding increasing pressure against the backdrop of souring political relations between Washington and Brussels. The divergence in EU-US policy toward Iran led European member states to create a Special Purpose Vehicle (SPV) that allowed European-based companies to circumvent US sanctions against Tehran by allowing non-US Dollar denominated transactions.

However, officials in Washington today announced that the EU may incur penalties in the form of sanctions if they continue with this economic program. After the news crossed the wires, crude oil prices spiked as investors’ fear over prospective supply disruptions swelled. Adding to the risk are the ongoing US-EU trade negotiations which may end up requiring Europe to adopt the current administration’s policy toward Iran.

The Swedish Krona spiked after Swedish GDP showed better-than-expected growth in the first quarter. In hindsight, seeing how overall Eurozone economic activity had improved, it is not entirely surprising to see that the export-driven Nordic country fared better amid strengthening European demand. However, despite the upside-surprise, the fundamental outlook for the Swedish Krona remains bearish.

Not only are European growth prospects still at the mercy of trader wars and regional political pains, but the global outlook still remains bleak. As an export-driven economy, the Swedish Krona is sensitive to shifts in global sentiment. Adding to the risk for SEK is the growing levels of household debt in Sweden which may be a financial ticking time bomb waiting to detonate when economic conditions turn dire. 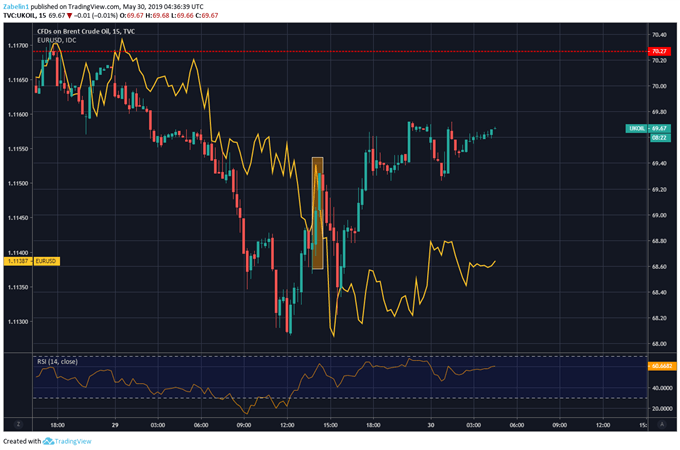