Will Global Growth Rebound if the US-China Trade War Ends?

The Australian and Canadian Dollars rose as Chinese GDP data topped expectations, easing worries about a downshift in worldwide economic growth and boosting the cycle-sensitive currencies. The New Zealand Dollar underperformed following a disappointing CPI report but managed to erase good deal of its intraday drop after the Chinese data crossed the wires. The Euro retraced upward after yesterday’s drop.

YEN, US DOLLAR MAY RISE AS MARKET MOOD SOURS

Looking ahead, the macroeconomic outlook will be informed by the Fed Beige Book of regional economic conditions as well as a first-quarter earnings report from Morgan Stanley. A downbeat tone on both fronts reflecting concerns about broad-based deceleration coupled with an assortment of lingering political risks – like Brexit and the looming European Parliament election – may sour the markets’ mood.

The anti-risk Japanese Yen and US Dollar may lead the way higher in such a scenario while commodity-bloc currencies bear the brunt of selling pressure. Currencies positioned away from the poles of the G10 FX sentiment spectrum – such as the Euro, for example – may find themselves lower against JPY and USD even as they gain on overtly pro-risk alternatives.

CHART OF THE DAY – WHY IS GLOBAL ECONOMIC GROWTH SLOWING? 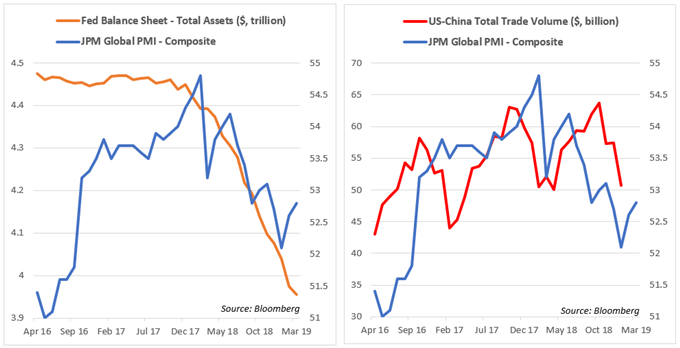 Much has been made of the US-China trade war as a catalyst for slowing global economic growth, with many citing the seemingly manufacturing-led nature of the downturn as evidence. That has inspired hope that an accord between Washington and Beijing will bring back momentum.

A look at the evidence suggests this is unlikely. Total bilateral trade volumes between the US and China have looked choppy at worst since the pace of worldwide economic activity growth (tracked by JPMorgan PMI) started to slow in 2018. Rather, the cuprit seems to be the onset of quantitative tightening (QT).

The US central bank dialed up the pace of unwinding its bloated post-crisis balance sheet last year, marking the first time since the 2008 blowup that nonstandard policy support has been removed in earnest. It is this tightening that seems to have cooled growth.

The Fed continues to wind down its asset stock – albeit at a slower pace of $35 billion per month starting in May versus $50 billion previously – even as it has abandoned plans for further interest rate hikes rate this year. This hints that the slowdown will continue whether the US and China decide to play nice or not.