EUR/USD Eyeing Key Economic Growth Indicators in US and EU

In the last breath of March, EURUSD shaved off almost two percent following the release of numerous underperforming European economic reports and a less-than-optimistic outlook for inflation from ECB President Mario Draghi. The regional slowdown – particularly out of key Eurozone economies such as Germany and France – has emboldened Euro bears as the outlook progressively seems to deteriorate.

Tomorrow, a cascade of key growth indicators will be released, which if in line with the prevailing trend of underperformance in the region, may fall short of estimates and exert further pressure on the already-battered Euro. US ISM data will be released tomorrow, though given the recent trend of underperformance in US economic reports, it is also likely that the indicator will fall short of the 58.0 forecast.

Given that market sentiment is broadly less risk-inclined, it is possible that the US Dollar may rise if local data underperforms. This is due to the Greenback’s unparalleled liquidity and status as the world reserve currency. If growth out of the largest economy in the world appears to be in jeopardy, investors may flock to the Greenback because of an increased demand to park their capital in the safest and most liquid asset.

Lingering fears over the outcome of Brexit will likely continue to dominate headlines as UK lawmakers scramble to avoid a no-deal outcome by the April 12 deadline. There is also the increasing concern over the future of EU-US trade relations as policymakers from both sides prepare for a possible revival of a cross-Atlantic trade war.

As European-based event risks begin to take the spotlight, the Swiss Franc may further strengthen against the Euro if investors begin to pivot from chasing yields to preserving capital. CHF may outperform in this regard relative to the JPY because of its regional proximity to the EU-based event risk. This might explain why the Franc has prospered amid fears of what looks like an increasing probability of a no-deal Brexit.

Year-to-date, EURCHF has already lost over eight percent amid the economic and political turmoil the region faced in 2018 ranging from trade wars to the Italian budget crisis. If the current state of European affairs – politically and economically – worsen, bullish sentiment for Euro (or what’s left of it) would likely evaporate and send EURCHF lower.

CHART OF THE DAY – EUR/CHF 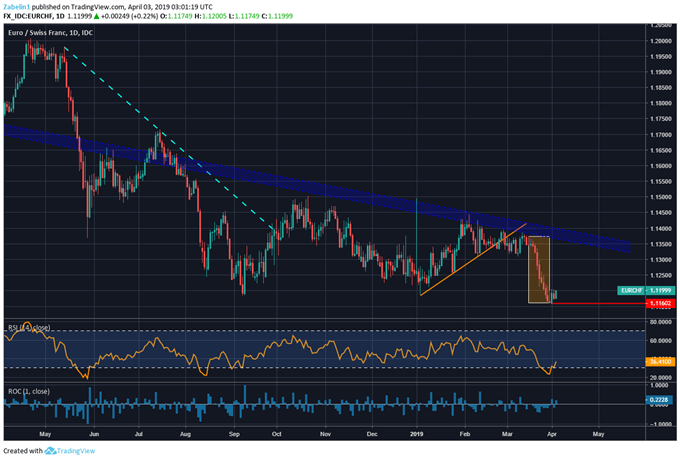