Sterling will be biting its proverbial nails today as the House of Commons gears up for a third major Brexit-related vote. After May’s plan was defeated on Tuesday, another vote was held on whether the UK would leave the EU without a deal. It was subsequently voted down. Now, UK lawmakers are gathering for a vote on extending the March 29 deadline. If it passes, will the EU agree, and much will it cost…for both sides?

EU officials stated that if an extension was granted, it could come with a 39 billion GBP price tag. Now, the cost for the EU is less pecuniary than it is political. If European officials are too lenient, it could incentivize Eurosceptic parties around Europe to follow the UK and vote to leave. Conversely, if they are too harsh and rigid, it could embolden parties around Europe that accuse Brussels of being a technocratic leviathan.

With the upcoming European Parliamentary elections in May, the EU has to do what it can to preserve what positive views there are of Brussels in order to ensure pro-European lawmakers are voted in and crowd out their Eurosceptic counterparts. The fear of geopolitically-based market disturbance in Europe has swelled with ECB President Mario Draghi citing it as a growing concern in the last policy meeting.

If the outcome of the Brexit vote results in a demand for haven assets, the US Dollar, Japanese Yen and Swiss Franc (CHF) may gain. The latter may outperform its other anti-risk colleagues due to its geographical proximity to the European-based event risk. This might explain why CHF was strengthening almost throughout the entire APAC trading hours.

The US Dollar will be focusing on local economic data. Month-on-month new home sales are expected to rise 0.30 percent after a previous rise of 3.70. If more people purchase homes, the subsequent spending in furniture and various other house-related expenditures multiplied across the population creates an aggregate spending effect that pushes up inflation. This in turn could influence Fed monetary policy and send the US Dollar higher.

CHART OF THE DAY: GBP/CHF, GBP/USD, GBP/JPY, GBP/EUR SINCE MARCH 11 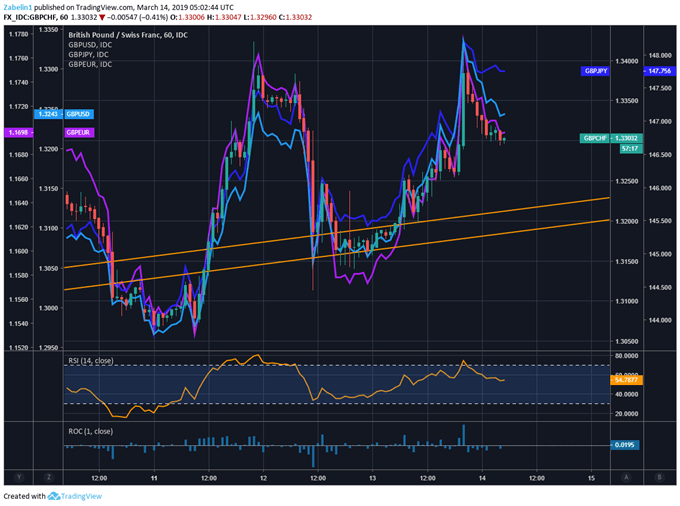