The anti-risk Japanese Yen and Swiss Franc outperformed as the markets’ mood soured in Asia Pacific trade. Regional bourses accelerated lower as a summit between US President Donald Trump and North Korean leader Kim Jong-un came to an abrupt end without an agreement on the next steps forward or even a joint statement.

Throttling hopes for a peaceful settlement with Pyongyang comes at an inconvenient time as tensions mount between India and Pakistan, making for troubling geopolitical backdrop overall. Meanwhile, soft Japanese industrial production and Chinese PMI data are adding to growing evidence of global economic slowdown, compounding the impulse toward risk aversion.

A soggy fourth-quarter Swiss GDP report as well as revised figures confirming that economic growth in France has slowed to the weakest in two years over the same period have done no favors for investors’ disposition. Bellwether S&P 500 futures are pointing convincingly lower.

German CPI data may not be much more helpful considering the trend toward underperformance relative to forecasts on regional economic news-flow in recent months. In fact, even if the expected uptick materializes, it too may be unsettling if traders reckon it might dissuade the ECB from expanding stimulus.

US GDP MAY ADD TO DOWNBEAT MOOD, BOOST DOLLAR

Later in the day, the spotlight shifts to US GDP data. The annualized growth rate is seen slowing to 2.2 percent in the final three months of 2018, down from the third quarter’s heady 3.4 percent but still amounting to a top-three result among major economies.

Perhaps somewhat perversely, an outcome that does not unambiguously nudge the Fed policy outlook into a more dovish direction might reinforce the risk-off atmosphere. It might help the US Dollar find renewed support against its major currency counterparts however. 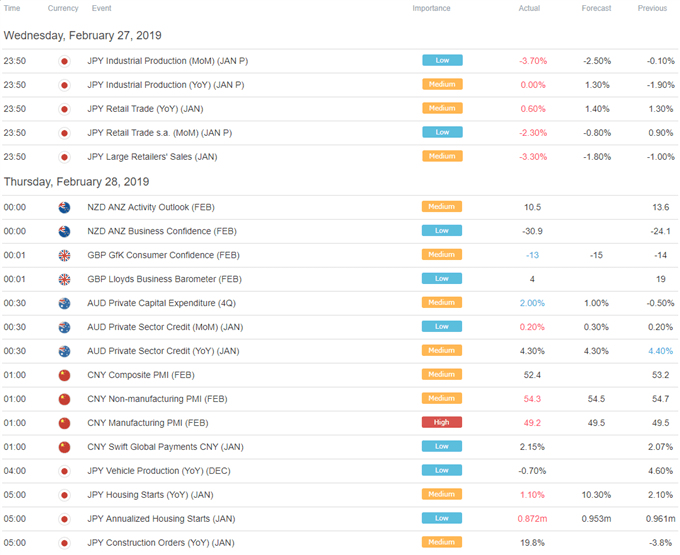