Markets Cheer US Budget Deal Hopes But Headwinds Loom Ahead

The sentiment-geared Australian Dollar outperformed while the anti-risk Japanese Yen traded broadly lower as risk appetite firmed in Asia Pacific trade. Regional bourses appeared to be bolstered by hopeful headlines hinting that US policymakers may have reached a deal to avoid another government shutdown.

Bellwether European and US stock index futures are pointing higher, signaling more of the same is likely ahead. The upbeat tone may be upset if US President Donald Trump withholds support for the bipartisan effort however, snuffing it out much as he did when the government shuttered in late 2018.

Soundbites from a gathering of Eurozone finance ministers might be another spoiler. The gathering will almost certainly discuss the ominous slowdown in regional economic growth and the potential for political instability therein as member states struggle to stay within budgetary thresholds.

A speech from BOE Governor Mark Carney might have a similarly chilling effect. He will almost certainly sound the alarm on growth, trade wars and the growing threat of a “no-deal” Brexit. Fed Chair Jerome Powell is also due to speak, but a focus on rural US development might imply limited policy guidance. 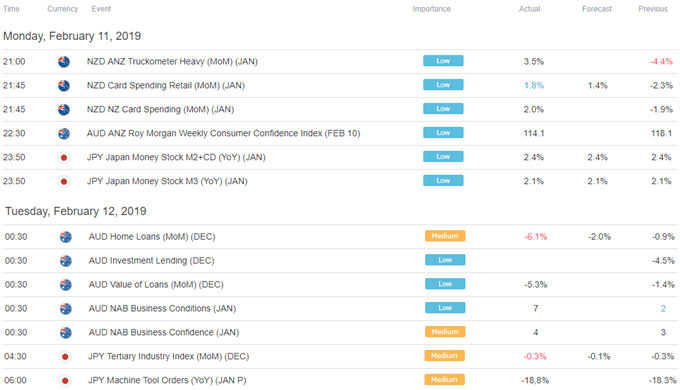