All eyes are on the Bank of England as markets brace for “Super Thursday”. Officials will issue a policy decision, release minutes from the latest meeting of the steering MPC committee and publish an updated quarterly Inflation Report (QIR), its favored forward guidance vehicle. Governor Mark Carney will also hold a press conference to explain what markets ought to make of all this information.

The BOE may be in a dour mood. UK growth has been slowing since mid-2018 and PMI data now puts it at the weakest since July 2016, the immediate aftermath of the EU Membership Referendum. Recent data flow has steadied a bit, but outcomes still tend to undershoot forecasts. Meanwhile, the threat of a “no-deal” Brexit seems to grow by the day. Saying as much might weigh on the British Pound.

A worried tone from Threadneedle Street may be amplified by updated European Commission economic forecasts. Downgrades to growth bets are likely, in-step with recent adjustments in IMF, World Bank and ECB projections (among others). Yesterday’s panicked response to cautious comments from RBA Governor Lowe hints markets remain responsive, setting the stage for another risk-off session.

Such a scenario is likely to bode well for the US Dollar and Japanese Yen, with the former trading on its unrivaled appeal as a haven of liquidity while the latter finds familiar support in the unwinding of carry trades. At the other end of the sentiment spectrum, the cycle-sensitive Australian, Canadian and New Zealand Dollars might continue to face potent selling pressure. 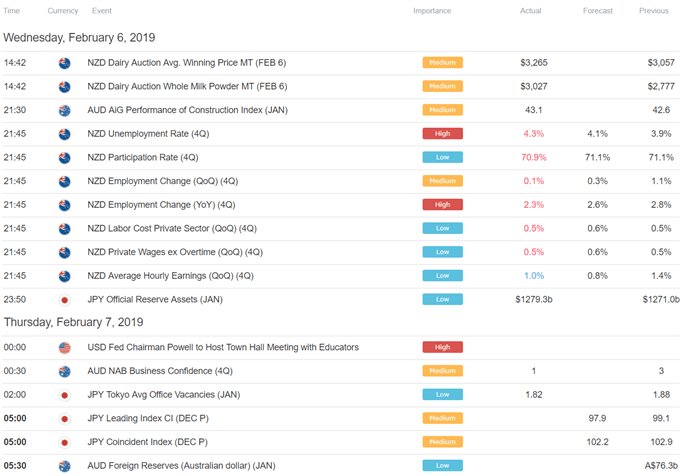 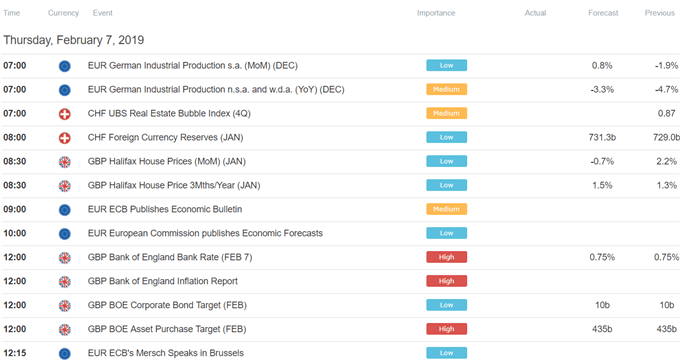