Euro at Risk on CPI, Dollar and Yen May Rise on US Data

Eurozone CPI data headlines the economic calendar in European trading hours. The headline year-on-year inflation gauge is expected to fall to 1.4 percent in January, the lowest since April 2018. A soft result might cool 2019 ECB rate hike prospects, weighing on the Euro.

Later in the day, the spotlight turns to US employment data and manufacturing ISM survey. The former is expected to show payrolls growth slowedwhile factory-sector activity perked up in January. US news-flow has notably improved relative to baseline forecasts recently, opening the door for upside surprises.

Rosy results might offer a lifeline to the beleaguered US Dollar. The currency touched the lowest level in almost three months this week following a dovish FOMC policycall. Officials stepped back from a promise of gradual rate hikes and even hinted that the pace of balance sheet unwinding may be slowed.

The data may also have potent implications for broader risk appetite trends. Markets cheered the Fed’s timid stance despite its origins in genuinely worrying developments, from slowing global growth to political instability across much of the G10 space and beyond.

With that in mind, evidence of a healthier US economy than investors have envisioned may be met with a somewhat counter-intuitive response. If it is judged as likely to ease the Fed’s concerns, it may well translate into a risk-off response that lifts the Japanese Yen alongside the Greenback.

The Canadian Dollar declined alongside a pullback in crude oil prices. The currency sometimes defaults to taking cues from one of its home country’s top export commodities on the belief that significant price swings can have broader implications for economic performance and thereby BOC monetary policy. 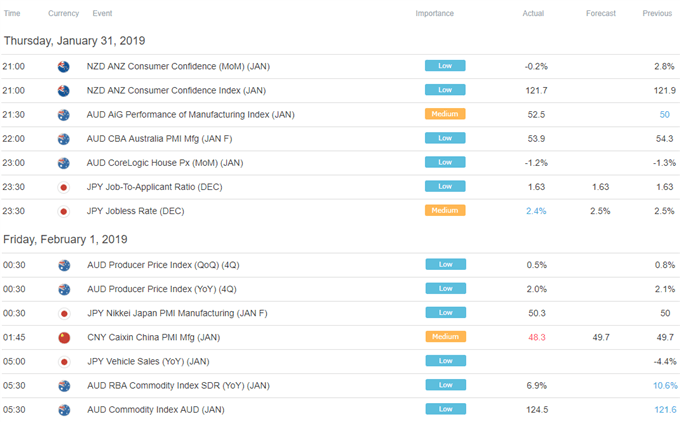