December’s US employment data takes top billing through the end of the trading week. The report is expected to show a 184k rise in nonfarm payrolls while the unemployment rate holds at a five-decade low of 3.7 percent and wage inflation backs off a nine-year high, inching down to 3 percent on-year.

US economic data outcomes have increasingly underperformed relative to baseline forecasts in recent months, painting analysts’ models as too rosy and opening the door for a downside surprise. Leading activity surveys including Markit Economics’ PMI and the Fed’s Beige Book bolster the case for a soft result.

Such an outcome may drive further dovish drift in Fed policy expectations, hurting the US Dollar. The 2019 outlook priced into interest rate futures now puts the probability of a cut at over 75 percent having envisioned two hikes as recently as early November.

The Eurozone CPI report headlines the European calendar. The headline on-year inflation rate is expected to fall, hitting an eight-month low of 1.7 percent. However, the release might be mostly overlooked by the Euro considering its limited implications for the near-term direction of ECB monetary policy.

As it stands, the markets put the probability of a rate hike before the calendar turns to 2020 at a mere 32.1 percent. The final revision of December’s composite Eurozone PMI print is seen confirming regional activity growth at the slowest since November 2014, bolstering the case against tightening. 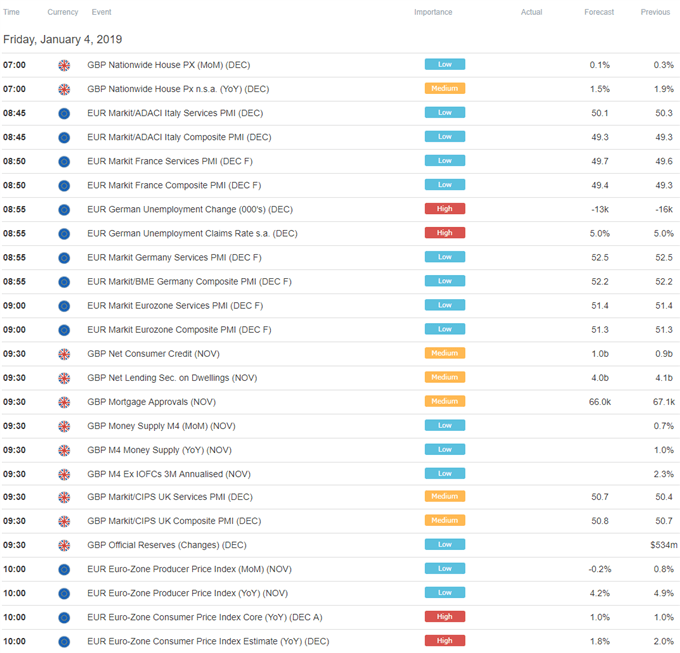