A monetary policy announcement from the European Central Bank is expected to confirm the conclusion of QE asset purchases by year-end. The stock of assets will remain steady for now via reinvestment of proceeds from maturing holdings however. The sharp downshift in economic activity in 2018 may also bring a downgrade of growth an inflation forecasts for next year and beyond.

That might endorse the recent downshift in priced-in expectations for the timing of the first post-QE interest rate hike. As it stands, the markets appear to be leaning toward no tightening at all in 2019. Ratifying such forecasts – however indirectly – would mark something of a climbdown for the central bank, which previously hinted at raising rates sometime around next summer.

That might weigh on the Euro to some extent, though the lion’s share of volatility is likely to be linked to comments from ECB President Mario Draghi at the press conference following the announcement. Here too, language about the likely timing of a hike will be closely evaluated. The fate of other liquidity provision programs is another important piece of the puzzle.

Recent turmoil in Italy and France has understandably buoyed borrowing costs. In fact, data from Bloomberg suggests region-wide financial conditions are at their tightest since June 2016. This is problematic as growth cools and QE ends. The ECB may thus opt to beef up other channels for funding support, such as the TLTRO facility. If it does, the single currency is likely to face more substantive selling pressure.

As if this were not enough event risk for one day, trades will also have to contend with an EU leaders’ summit. While there might be something of a breakthrough in talks with Rome, a worrying turn in Paris’ spending plans might cast a pall on the proceedings. Indeed, a path forward that doesn’t amplify political fissures within the regional bloc from one angle or another seems elusive.

Eurosceptics may be emboldened if France does not face meaningful pushback even as Brussels threatens Italy with penalties for its budgetary excesses. On the other hand, taking too hard of a line with vocally europhile President Emmanuel Macron may undercut his administration and revive worries about an anti-EU government emerging in the region’s second-largest economy. The Euro is at risk in either scenario. 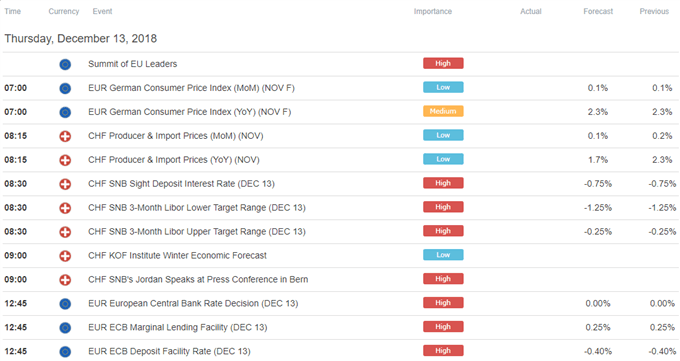