European politics remain in focus despite the cancellation of a fateful vote on the Brexit deal negotiated by UK Prime Minister Theresa May. Parliament was due to take up the agreement today but the government backed off as it because clear it would not have the votes to succeed.

Ms May singled out strong opposition to the so-called “Irish backstop” – a provision meant to ensure that a hard border will not parse the island of Ireland after the EU/UK divorce – as the main sticking point for most MPs. As she announced the delay, she implied further work on this front will follow.

The spotlight now turns to Italy as it tries to nail down a budget compromise with EU authorities. Conflicting reports abound, with some local media projecting that an accord is imminent while others say the battle lines have hardened ahead of a European Council meeting on Thursday.

Concrete progress may be too much to ask for before Italian Prime Minister Giuseppe Conte meets European Commission President Jean-Claude Juncker Wednesday. Still, a steady stream of divergent headlines may inspire Euro weakness as traders look to reduce exposure amid uncertainty.

Meanwhile on the sentiment front, bellwether S&P 500 futures are pointing lower to signal a broadly risk-off mood ahead. That may be most decisively supportive for the dependably anti-risk Japanese Yen as traders unwind carry trade exposure funded in terms of the perennially low-yielding currency. 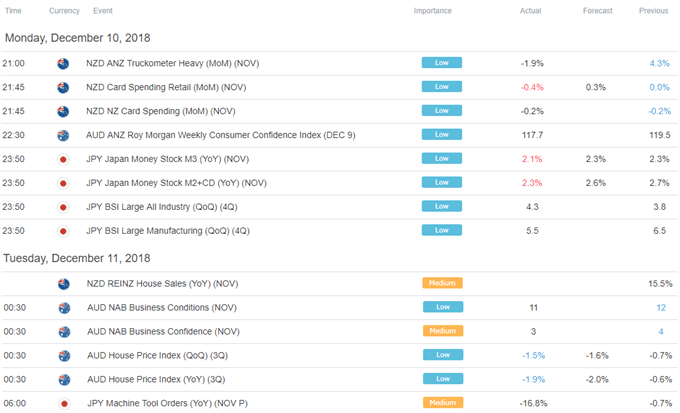